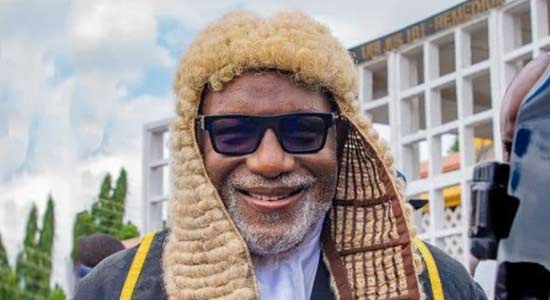 The Ondo State Governor, Rotimi Akeredolu, SAN, and the Attorney-General of the Federation and Minister of Justice, Abubakar Malami, yesterday, disagreed over the issues of insecurity and restructuring in the country.
The two Senior Advocates of Nigeria (SANs) spoke at the ongoing meeting of the 36 Attorney-General of the Federation held in Lagos.

Akeredolu, had in his Keynote address warned that the inability of the federal government to secure life and property would soon leave citizens with no choice but to arm themselves in self-defence stressing that the Nigeria Police had been overwhelmed.

The governor, who asked the Police to “close shop” if the federal government could not meet its equipment needs, insisted that the police had failed in their constitutional role of protecting Nigerians and that if the situation did not improve, citizens would be left with no other option but to arm themselves in self-defence.

“The current spate of insecurity in the country leaves us with no room for equivocation on the right of the states to maintain law and order through the establishment of state police.

“The growing distrust in the polity is a direct result of the disconnect between the federal government and the constituent units of the country. The economic adversity currently experienced in the country, points directly, at the defective political structure,” Akeredolu said.

The governor, who maintained that a unitary system could not work, successfully, in a country like Nigeria, further said, “The 1999 Constitution has been amended twice. There is another promise of further amendments arising from the manifest irregularity in many provisions.

“This has compelled many lawyers and educated citizens to insist on having a new Constitution, which will reflect the agitations of the various groups, which make up the country. The law is becoming increasingly less certain under these circumstances.

“The crises created by the 1999 Constitution, as amended, have been unending. There have been agitations that the Exclusive Legislative List in this Constitution is limited to Nigeria’s external trade, customs duties, export duties, tax on incomes, profits and capital gains, interstate commerce, external borrowing, mining rents, and royalties from mineral resources, among others.

“The federal government, has consistently rejected this suggestion, presumably, because of the humongous 52% revenue allocation to it while the 36 States and the 774 Local Governments share the remaining 48%,” the governor stated.

Akeredolu, therefore, challenged states to restructure the country by, among others, setting up their anti-graft agencies.

However, in his address at the event, Malami said governors could not continue to agitate for restructuring and state police, when they were responsible for the compromise and mismanagement of the current system.
He said governors, who have taken over the allocations of local government in their states have no moral right to ask for restructuring.

Malami also stated that, “state police will not work, because state governors would abuse it, adding: “look at the way they treat local government, imagine what will happen if they control the police?”

Malami advised the governors to utilise the existing structures through the National Assembly to press on with their demands for restructuring and other constitutional amendments.

He said the present controversies surrounding the Paris/London Club loan refunds, could have been avoided if NGF/state governments and ALGON, who engaged the services of consultants and contractors, honoured their agreements.

“NGF and ALGON have not denied engaging the consultants and contractors on behalf of their respective States and Local Governments,” he maintained.

Other speakers at the event were Governors Babajide Sanwo-Olu, the Chief Judge of Lagos State, Justice Kazeem Alogba, the state’s Attorney-General, Moyosore Onigbanjo (SAN), the President of the Nigerian Bar Association (NBA), Olumide Akpata and Director-General of the Nigerian Governor’s Forum, Asishana Okauru.