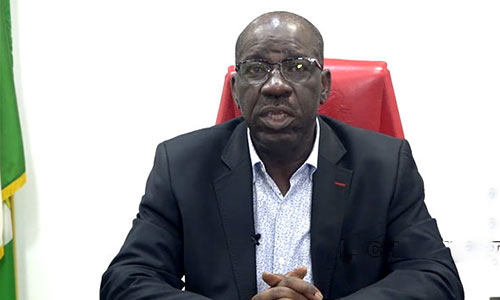 The University of Ibadan (UI) Bachelor’s Degree certificate forgery and perjury case against Governor Godwin Obaseki of Edo state, on Monday resurfaced at the state election petitions tribunal in Benin.

At the resumed sitting, a forensic expert, Raphael Onwuzuligbo, a retired Assistant Superintendent of Police (ASP), declared that the UI’s certificate presented by Obaseki in 2016 was different from the one he presented in 2020 to the Independent National Electoral Commission (INEC).

Onwuzuligbo who appeared based on the subpoena by Action Democratic Party (ADP), and its governorship candidate, Iboi Emmanuel, testified and was cross-examined by the counsel to the respondents.

ADP and its governorship candidate, in the petition with reference number: EPT/ED/GOV/01/2020, prayed the tribunal to disqualify Obaseki over his controversial UI certificate and nullify the votes cast for him, thereby ordering INEC to conduct a fresh election involving all other qualified governorship candidates, excluding PDP and Obaseki.

Justice Yunusa Musa, who led two other judges (Justices Suleiman Yahaya Abubakar and Olufunmilayo Stanley), adjourned till Tuesday for continuation of hearing in the ADP’s petition.

The tribunal also heard the petition by the governorship candidate of New Nigeria Peoples Party (NNPP), Tracy Agol, who also prayed for an order to compel INEC to conduct fresh election involving all the qualified candidates, excluding PDP and Obaseki.

Counsel to the first respondent (INEC) in Agol’s petition, Razak Isenalumhe, opened his defence by tendering the Certified True Copies (CTCs) of INEC’s timetable and schedule of activities for the September 19 2020 election in the state.

No objection was raised by the lead counsel to PDP, Hamed Raji; Obaseki, Ken Mozia, SAN; and Agol, Stella Agoha.

In the Agol’s petition, the chairman of the tribunal adjourned till Wednesday for defence of the second respondent (PDP).