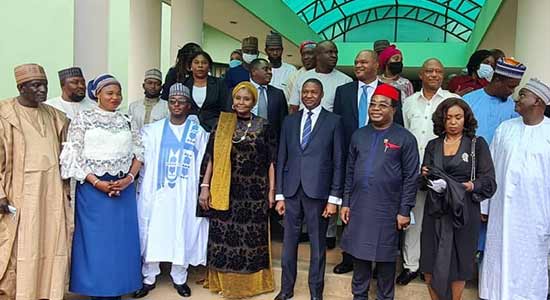 The Attorney General of the Federation and Minister of Justice, AGF Abubakar Malami, has said the Federal Government is fulfilling its international obligation to set up an independent National Human Rights Commission for the promotion and protection of the rights of Nigerians.

The AGF cited the disbandment of the Special Anti-Robbery Squad and the compensation paid to victims of their human rights violations as a testimony of the government’s effort in the direction.

Malami said this on Monday at the inauguration ceremony of the governing council of the National Human Rights Commission held at the HAGF Conference chambers in Abuja.

He said, “I am indeed delighted to be here today to inaugurate the 5TH Governing Council of the National Human Rights Commission. This is pursuant to the directive of the Secretary to the Government of the Federation for me to inaugurate the Council on behalf of the President, Commander-in-Chief.

“As you are aware, the Commission was established by the Federal Government of Nigeria in 1995 in fulfilment of its international obligation pursuant to 20th Dec 1993 Resolution 48/134 of the United Nations General Assembly that enjoined all member States to establish National Human Rights Institutions for the Promotion and Protection of Human Rights. This followed the adoption of the Paris Principles of 1993 for the Establishment of National Human Rights Institutions at the 2nd World Conference on Human Rights in Paris 1993. The first world conference on human rights had been held in Vienna Austria in 1991.

“The Government amended the NHRC Act in 2010 for its operational independence by entrenching the tenure of members and ensuring adequate funding and effectiveness of the Commission. Since the 2010 Amendment of the NHRC Act, members are nominated by the President and confirmed by the Senate before appointment letters are issued. Again the funds of the Commission are now under the Consolidated Revenue Fund of the Federation. This means that funds appropriated for the Commission are released one hundred per cent to perform its functions.

“Furthermore, the 2010 amendment provided that in the discharge of its functions and exercise of its powers, the Commission shall not be under the control of any authority or person. All these measures have been taken to ensure that the Commission is able to advise the Government properly in the fulfilment of its international human rights obligations and protect and promote the human rights of Nigerians and persons living in Nigeria without fear or favour in line with the Paris Principles. It is a known fact that the present government had complied with the award of damages for victims of the 2012 Apo killings of Okada riders by security agents, as well complied with the 2018 White paper recommendations on Special Anti-Robbery Squad of the Nigerian Police.

“The disbandment of SARS and the setting up of various panels of Inquiry investigating and awarding damages for human rights violations by SARS is a clear testimony to the fact that this government is fulfilling its international obligation to set up an independent National Human Rights Commission for the Promotion and protection of the rights of Nigerians.

“Council Members should be guided by the Act, and relevant Government Circulars on tenure, the part-time mandate of members except for the Executive Secretary, emoluments etc. Furthermore, in discharging your duties, you are bound by the Code of Conduct for Public Officials and you are expected to take an oath of office before the resumption of your duties.

“I want to use this opportunity to commend the Executive Secretary, staff and Management of the National Human Rights Commission who have managed the affairs of the Commission pending the appointment and inauguration of this Council for holding the forth without blemish. I look forward to a cordial working relationship between the Management and the Council to ensure steady progress and achievement of greater heights for the Commission in the near future.”