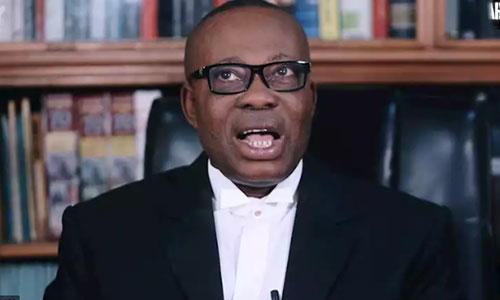 The Chairman, Nigerian Bar Association Section on Public Interest and Development Law (NBA-SPIDEL), Dr. Monday.O. Ubani, says it is unlawful for the federal government to issue a directive mandating every Public and Civil Servants to be vaccinated against COVID 19.

TheNigerialawyer reports that the  Secretary to the Government of the Federation/Chairman Presidential Steering Committee on Covid-19, Mr. Boss Mustapha announced that all civil servants in Nigeria shall with effect from 1st of December, 2021 show proof of vaccination or present a negative covid-19 PCR test result done within 72 hours to gain access to their various offices within Nigeria and Missions abroad.

Two States in the Federation had earlier on before now made it compulsory for the citizens in their various and denying them access to public space and religious worship if they are not vaccinated. In the case of Edo State, an interim order restraining the state government from going ahead with the policy was ignored by them.

Dr. MOU, reacting to the above statement on Saturday, noted that the hasty policy pronouncement by these governments is faulted on several ground.

He said, as at today in Nigeria, there is no enabling substantive legislation that makes covid-19 vaccination compulsory.

“In the absence of any such law, any policy statement from the government that lacks legal backing, especially when it is meant to take away guaranteed rights, is illogical, unlawful, null, and void.

“The government is advised to follow due processes and enact a law that will pass through all the legislative steps that have the right to derogate on the rights already guaranteed, and it must be a reasonable law permissible in a democratic society.

“There may be persons with valid health-related or other relevant reasons who may want to opt-out of such compulsory vaccinations and the law must allow them. If such exceptions that are justifiable are not provided, then it is likely that such law violates the human rights of those who are vulnerable.

He queried if the government has proved without any doubt the health risks associated with the vaccinations?

“As the government has failed to concretely convince the citizens on the issue of health, safety and bodily harm of this vaccination, then they are advised to desist from pursuing their present policy that is in collision course with the bodily integrity of the citizens.

“They should rather utilize a persuasive methodology to get citizens convinced of the benefits of the said vaccinations but most importantly, they are advised to pursue free education, free health policies, and other social welfare policies and make them compulsory for the citizens which will, in turn, attract accolades for the government.

“The punishment of denial of access to office by the directive is a clear violation of the contractual terms of employment, and secondly a restriction to freedom of liberty and movement guaranteed under chapter 4 of the 1999 constitution as amended,  Universal Declaration of Human Rights as well as African Charter on Human and Peoples Rights. When these civil servants were employed, compulsory vaccinations and its attendant punishment for non-compliance were not part of their terms of contract. This new policy is a rude interruption to cordial labour relationships and is against international best labour practices.

“The Government’s denial that the directive did not make vaccination compulsory is not only laughable but a mockery of everything that is decent. If it is not compulsory as insinuated, why would the alternative be more draconian than the first option? The second alternative is to the effect that any un-vaccinated civil servant must show proof of negative result every 72 hours. An average single test costs 50 thousand naira and this is a country where only a few States pay their civil servant 30 thousand as a minimum wage!  Where do the government expect any civil servant who chooses not to take the vaccination to raise such money to be jumping in and out of laboratories every 72 hours to prove that he or she is free from covid-19 virus?

“The truth of the matter is that there are hesitancies to the vaccinations worldwide and this is fueled by several theories and rumours. In the state of such confusion, the State must respect the rights of citizens to make informed personal decisions and not to be compulsorily rail-road into vaccination whose final implication is unknown even to the scientific community.

“It is our contention that the civil servants have a right to their privacy and the right to decide what is best for their health and well-being.

“The present policy of insisting on the due observance of covid 19 protocols and the tests before exit or entry into the country is part of the elaborate measures to curb the pandemic, after all, Nigeria has escaped the predictions of doom as a country that will experience colossal death due to the pandemic. We are not dropping dead on the streets as they had predicted and will not as long as we insist on strict covid-19  protocol’s observance.

“The best policy for the country remains that the citizens be not allowed to lower the guard in preventive measures in dealing with the pandemic.
Any directive on compulsory vaccination is immature, needless, unacceptable and hereby totally rejected.

“The Federal Government is hereby put on notice that any intention to pursue this illegal policy will be met with a stiff legal challenge as such directive violates the existing labour terms and the fundamental rights of the civil servants to their privacy, life, movement, religious belief and faith, and liberty.

“A word is enough for the wise!”