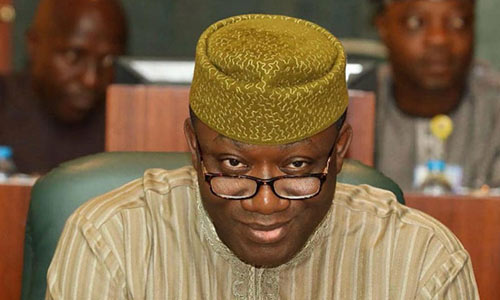 Chairman of the Nigeria Governors’ Forum and Ekiti State Governor, Dr. Kayode Fayemi, has said the way and manner the National Assembly handled the clause that dealt with electronic transfer of results in the draft Electoral Bill suggested there could be some hidden agenda.

The governor, who was however convinced that the lawmakers could not have had any ulterior motives, however, warned against over-regulating the electoral body, the Independent National Electoral Commission (INEC).

Fayemi, who spoke during a television programme in Abuja, reiterated that there was the need for caution in the attempt to over-regulate the activities of INEC.

He said the National Assembly acted as though it has a hidden agenda behind the amended electoral act by empowering the NCC to decide on electronic transmission of results.

According to him, the clause empowering the NCC and the National Assembly to be the final arbiter in determining usage of electronic transmission of results for elections amounted to compromising the INEC.

He stressed that the issues around the electronic transmission of election results in the Electoral Act Amendment Bill should have been better handled by the National Assembly.

“INEC should be allowed to independently determine how election results are transmitted and not be overregulated while discharging its constitutional duties. I feel that the hullabaloo around this could have been avoided.

He held that the decision by the National Assembly was what provoked suspicion that there was a hidden agenda behind the amended Electoral Act.

Meanwhile, with its new update, INEC said those that have registered so far consisted of over 73.5 per cent of the registrants between the age group of 18 to 34 years.

In a statement by INEC national commissioner and chairman of Voters Education, Festus Okoye, the commission said the exercise that commenced the online pre-registration of voters on 28th June 2021, now has over one million Nigerians registered.

According to Okoye, the detailed distribution of the registrants by age, State/FCT, gender, occupation and disability for week four of the exercise has been uploaded to the Commission’s website and social media platforms.

He said the exact locations of the designated centres have already been uploaded on the INEC website and social media platforms.

For further details, he said Nigerians were encouraged to contact the INEC State offices through the dedicated telephone numbers provided in the uploaded publication.

He explained that Nigerians, who pre-registered online could now complete their registration at those centres based on scheduled appointments.

In addition, he stated that other Nigerians, who preferred to register physically/in-person could now do so at those centres.

“Both online pre-registration and physical/in-person registration will continue simultaneously until the suspension of the Continuous Voter Registration (CVR) exercise on 30th June 2022 to enable the Commission to clean up the data and compile the voters’ register for the 2023 general election.

“The right to vote begins with the registration of voters. Thus, as we enter the next phase of the CVR exercise, we once again appeal to all citizens, who wish to register to approach any of the Commission’s State or Local Government Area offices nationwide to do so,” he said.

He reminded Nigerians that the ongoing registration did not include those already registered as voters, adding that the current exercise was only open to Nigerians who were 18 years and above and who had not registered before.

He, however, said it was an offence under the Electoral Act for any citizen to register more than once.