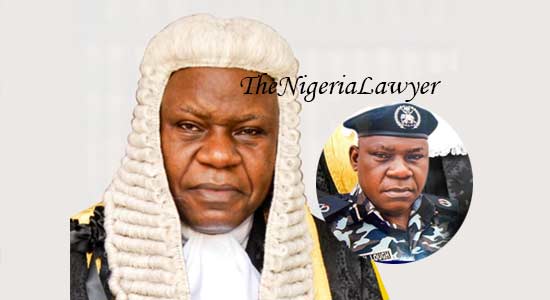 An Assistant Commissioner of Police, Simon Asamber, who made history as the first Police Officer to be elevated to the rank of Senior Advocate of Nigeria (SAN) has recounted how he got the SAN rank on his first application and the challenges of the Nigeria’s administration criminal justice system.

Lough, in an interview with the NATION newspaper, said he was fascinated by late Gani Fawehinmi (SAN’s) style of activism as a lawyer. He said he wanted to be involved in advocacy for people for free, to ensure that justice is done to them. This was what informed his decision to read law.

On his experience so far in the Nigerian Police Force, the learned silk said he has worked in several departments. He said at a point he became concerned that after exchanging fires and arresting armed robbers, he saw them back to the society. So when he joined the Prosecuting Department, he vowed to make sure that all cases are diligently prosecuted and that is what he has be doing till date.

He said, “I have served in many departments since I passed out of the Police Academy. But, in the Operations Department, we used to confront armed robbers and exchanged fire with them.

“When you arrest them, you hand them over to those who will prosecute them. But, at a point, I noticed that these same armed robbers that we arrested were back in the society, they had been released.

“There was one particular incident that made me feel that this practice had to stop. We arrested a gang of armed robbers in Area Eight, Abuja. They attacked one lady and raped her two daughters.

“When we were alerted, we went there, confronted them and killed two of them there. The others were arrested and handed over to those who should prosecute.

“After some time, I went to do something in Wuse (Abuja) and somebody started shouting, “Oga! Oga! Oga!” I was surprised. I wondered who was calling me oga.

“I could not recognise him, but he knew me. I moved closer to him and asked what he wanted, and he said: “Oga, were you not among those who arrested us at Area Eight? Have you forgotten?”.

“When I asked how he got out, he said they were arraigned in court, remanded in Suleija Prison (Niger State) and, after some time, they were granted bail.

“He added that the prosecutor had stopped coming to court. He said he saw me and felt he should greet me. This was a person we arrested while committing armed robbery. I felt bad.

“So, when I got to the Legal Department, I made up my mind that I must ensure that people get justice. I could not just imagine how the lady, whose daughters were raped, would feel if she runs into that same man that called me in Wuse.

“I felt for her and other victims of crimes. At that point, I made up my mind that once I charge an armed robber to court, I will ensure you are diligently prosecuted until justice is served.

“That is why in all the armed robbery cases I prosecuted, the defendants were convicted. I have also done cases of murder and have secured a number of convictions.”

Mr. Lough further identified the challenges facing police prosecutors. According to him, the “major challenges is the reluctance of victims to attend court to give evidence in the course of prosecution. A person will be robbed, his property would be recovered, but when he/she is invited to give evidence, to tell the court what happened, they will be so sceptical. And, I used to pay their transport with my money. But, for them to come to court testify, and for the court to know that they are the victims and the owners of the recovered property, they will be reluctant and sceptical.”

Lough, SAN noted that one of the things contributing to delay in criminal trials is trial within trial.

“There are lot of things involved in that. Sometimes the law itself contributes to delay. There is a procedure called trial-within-trial in law. Section 28 and 29 of the Evidence Act say if somebody makes a confessional statement, before the statement is admitted, the court must be satisfied that it was voluntarily made by the maker. So, to ensure that such statements are voluntarily made, the court normally conducts a mini-trial, called trial-within-trial if a defendant denies voluntarily making the said statement.” he said

On how he attended the fest of becoming a SAN, Mr. Lough said he wanted it, prepared for it, prayed for it and applied for it. He said at the time he applied he was having about 100 cases in High Court, 32 in Court of Appeal and 7 at the Supreme Court.

He said, “When you want something, you must prepare for it very well. I was qualified long ago. But, when I made up my mind to apply, I prayed to God and sought His permission on when to apply. So, when God asked me to apply, I picked the form and ensured that all that were needed were in place.

“Some people don’t check their cases properly, some cases have expired, yet they don’t know. But, in my case, because I have done so many cases, I was having over 100 judgments at the High Court; 32 judgments at the Court of Appeal and seven at the Supreme Court. So, I did not have any problem when I applied.

“When I went to submit my works, they were a pick-up load, and people were wondering how many people’s works they were.

“I packaged about 50 High Court cases. For the Court of Appeal judgments, I wanted to package 32, but it was getting too voluminous. So, I said when they said five, at least 22 should be sufficient.

“Before then, I had read the rules very well and understood what the requirements were and how to present your application. In fact, I read them (the rules) more than 10 times.

“So, when I was to submit, I arranged my works very well so that they were easy for those who were to scrutinise them.

“My application went through the first and second filtration with ease, without any query.

“At that stage, many people had queries and they had to go back to face a panel. Some were later cleared and some were not.”

He said another thing that favoured his application for SAN rank was his integrity. According to him, he rejected many bribes and his integrity was affirmed even by a member of the LPPC during interview

“Another important element has to do with your reputation. Your integrity is very important. It attracts 25 marks. For me, I have handled so many cases, with so many temptations. If I had succumbed to any of the temptations, like people coming to bribe you, it would have counted against me on such occasion. People will bring money to bribe me, but I will tell them that my conscience and God are the two things that guide me, not their money. That was what saved me.

“You know, I read law to do justice. That has always been at the back of my mind. People will bring money; big, big money and say ‘See, how do we handle this case?’ But, I will tell them to go with their money, that I was not interested.

“After the release of the first list and I went for the Nigerian Bar Association (NBA) interview, one of the interviewers had held watching brief in one of the cases I prosecuted.

“In that case, the defence counsel offered me a bribe of N10 million. His client defrauded somebody of $4.6million. The defence counsel followed me to my hotel after the day’s proceedings and requested me to give his client soft landing.

“I told the lawyer to take the money he brought and add more to pay the victim of the crime, then ask the complainant to write the Inspector-General of Police (IGP) about the development, then we will know how to proceed from there

“Eventually we concluded the case and the defendant was convicted and sentenced to two 10-year terms, to run consecutively, meaning that he will spend 20 years in prison.

So, when I went for the NBA interview and the lawyer saw me, he told the Chairman of the panel that he knew me very well. I was taken aback. He said, “You see this Simon Lough, even the devil cannot bribe him.”

“He proceeded to recall what happened in that case and moved that I should be allowed to take a bow and go.

“When he finished, another member said we should not only allow Simon Lough to go, we should encourage him not to change, because people like him are not many in the society.

“So, in essence, what I am saying is that in anything we do, our integrity matters. Whatever you are doing, you must think of tomorrow, it matters.” Mr. Lough said

The SAN rank is awarded as a mark of excellence to members of the legal profession have distinguished themselves as advocates and academics.