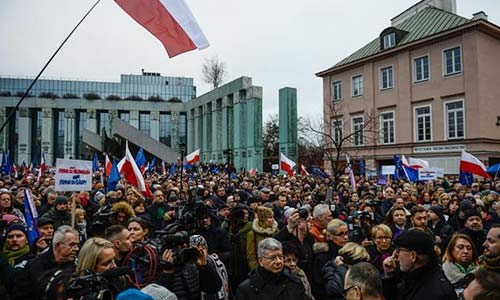 Warsaw, Poland – Judges from across Europe have joined Polish peers, lawyers and members of the public as they marched in silence to protest against what they describe as the systematic erosion of judicial independence by Poland’s government.

The office of Warsaw’s mayor said some 30,000 people took part in Saturday’s march to denounce a bill that would allow the Law and Justice (PiS) government to discipline judges who question its judicial changes.

The introduction of the measure in December is the latest episode in a years-long squabble over courts reform in the country that has triggered a feud with the European Union.

At the march in the capital, participants held banners reading “The right to independence” and “The right to Europe” as well as Polish and EU flags, referring to Brussels’ standoff with the ruling party over the reforms.

Judges from more than 20 other European countries, many wearing judicial robes over their thick winter coats, carried placards with their countries’ names. As each delegation was announced, chants of “Thank you, thank you” rose from the crowd.

About 1,000 Polish judges also joined the rally, with many travelling to Warsaw from all corners of the country. Judge Irena Kryska, from northwestern Szczecin, told Al Jazeera: “I hope that we are making clear, both to the government and to citizens, that this matters to us.”

“We want to feel that we are safe at work. A judge cannot fear that if a ruling they hand down is inconvenient for the government, they will bear consequences. It takes a lot of courage to stand up to that,” added judge Halina Musial, a colleague.

The protesters made their way from the Supreme Court building, past the presidential palace, and then towards the parliament building, symbolising the separation of powers in Poland.

Bartosz Wojcik, a lawyer from Krakow, told Al Jazeera that he came to support his clients. “When going to court it’s important to be sure that the judge is free of any external pressure.”

Despite protests in some 200 towns and cities when first announced, the draft law passed the PiS-dominated lower house in late December. It is now being considered by the opposition-controlled Senate, which may delay its passage, but is unlikely to stop it.

‘Muzzle law’
The draft law, which makes it easier to dismiss or fine uncooperative judges, is seen as a response to an earlier blow to the government’s reforms.

In early December, the Supreme Court ruled that its own disciplinary chamber, a body created by the government, is “not a court within the meaning of EU and national law”.

The court also found that the constitutional body nominating judges, the National Council of the Judiciary (KRS), which has been reformed to be mostly appointed by parliament rather than other judges, is “not an impartial and independent body”.

When first introduced in December, Małgorzata Gersdorf, Supreme Court chief justice, warned that the changes would “infringe EU treaties” and risked driving Poland out of the bloc.

For its part, the government claims that the bill is necessary to stop judges from “undermining” the legal system.

The Ministry of Justice has issued a statement explaining that “the indicated solutions in the scope of disciplinary liability are modelled on French and German solutions”.

In an article published on Saturday in German newspaper Die Welt, Polish Prime Minister Mateusz Morawiecki repeated the customary justification for the wider judicial overhaul as a way of sweeping the ranks of judges with past links to the former Communist regime.

The government’s other declared goal of making the sluggish courts system more efficient has thus far not borne fruit, as the average length of proceedings has extended from four months in 2015, to five months in 2018.

International attention
Since taking power in 2015, PiS has been at loggerheads with the EU over its judicial meddling, including installing allies in the constitutional court, trying to force Supreme Court judges into retirement and politicising lower-level appointments.

The European Commission’s vice-president, Vera Jourova, has urged Poland to halt work on the legislation until it had been properly consulted, echoing calls by the Council of Europe and the United Nations’ High Commissioner for Human Rights.

At Saturday’s protest, Irish Supreme Court judge John MacMenamin carried letters of support from Irish Chief Justice Frank Clarke and the Association of Judges of Ireland, according to the Irish Times.

At the request of the opposition Senate speaker, the Venice Commission, an advisory body of the Council of Europe, visited Warsaw this week to prepare its “urgent opinion”, but the government declined to meet the representatives.

Deputy Prime Minister Jacek Sasin responded that “Poland is a sovereign country and shapes its own legal system, including the judiciary. These are not issues governed by European law”.