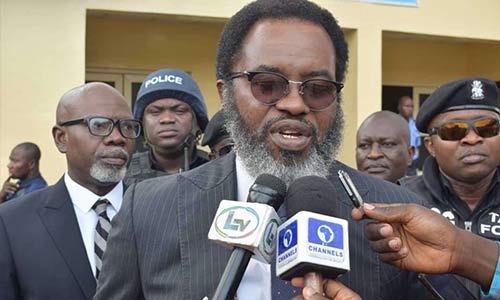 Attorney-general and commissioner for justice in Lagos, Moyosore Onigbanjo, says many “contradictions” in the report of the state’s judicial panel on police brutality make the findings unreliable.

The Lagos government, On Tuesday, released the white paper on the report submitted by the judicial panel set up to probe cases of police brutality in the state.

The panel had submitted two reports — one on cases of police brutality and another on the Lekki shooting incident – on November 15.

The panel had listed nine fatalities from the shooting at the Lekki tollgate on October 20, 2020, however the white paper, citing what it described as “fundamental inconsistencies,” rejected the figure, adding that that the findings are not supported by evidence.

Buttressing this stance in a chat with Arise TV on Wednesday, Onigbanjo, head of the four-person white paper committee, said the panel’s findings on the shooting at the Lekki tollgate were contrary to the evidence provided.

He added that the panel’s report “created doubts and gaps” and “did not explain how they arrived at that conclusion, the names, who shot them and when they were shot”.

“Then the panel then goes on to say there were nine dead. If you look at that page where the deads from the Lekki tollgate were listed, they did not explain how they arrived at that conclusion, the names, who shot them and when they were shot. So that’s a contradiction because what Professor Obafunwa said is different from the conclusion they are now reaching. And there were so many others.

“They also said one Nathanial Solomon died at Lekki tollgate. It also turns out that Nathaniel Solomon was a witness before them and handed a petition in respect of his late brother.

“Those contradictions and many more made that particular finding unreliable. Because for a finding that somebody died at a scene to be acceptable, there must be no doubt. What the panel did create doubts; it created gaps in their story of nine deaths. And once there are doubts, the doubts are usually resolved in favour of the person you’re accusing to have murdered or killed those people — because of this, that particular finding was rejected.”

Onigbanjo then said the two reports from the panels will be release to the public soon to allow the people to make their own judgment from the findings.

“We are also going to release the two reports of the panel to the public to judge by themselves. So we are not just going to be a case of Lagos state government analysing this in itself and coming to its conclusions. We are going to make them available to everybody to read it,” he said.