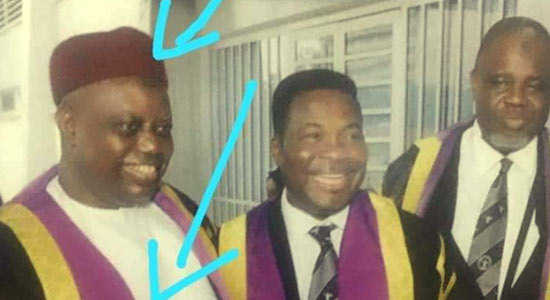 Recently, a picture of the Emir of Lafia, Rtd. Justice Sidi Bagge was trending on social media.

In the picture, His Majesty was spotted wearing Babariga, a Life Bencher robe and a cap.

He was posing for a picture alongside other lawyers including Chief Mike Ozekhome SAN.

The dressing has attracted both positive and negative reactions from lawyers across the country.

Some lawyers were of the view that the act of wearing an attire different from the dress code stipulated for the call to bar ceremony by a Life Bencher is a total disregard for the rules and traditions of the Legal Profession.

Furthermore, it’s a bad precedent as it won’t serve as a good example to the new wigs who are just entering the Legal Profession.

On the other hand, another lawyer was of the view that the dressing is justified because His Majesty was attending the call to bar ceremony not as a Life Bencher or as a former retired Supreme Court Justice but as a traditional ruler and also a guest of the Body of Benchers.

Another lawyer berated those criticizing His Majesty that he was wearing the attire in an honorary capacity and also the former Supreme Court Justice has reached the pinnacle of his career, so instead of criticizing him, the critics need to face their career and be concerned about their growth in the Legal Profession.

For THENIGERIALAWYER, it all depends on the capacity in which he attended the ceremony.

“If it was as a Life Bencher, then his dressing was inappropriate.

“On the other hand, if it was as a traditional ruler, then it was ok.”