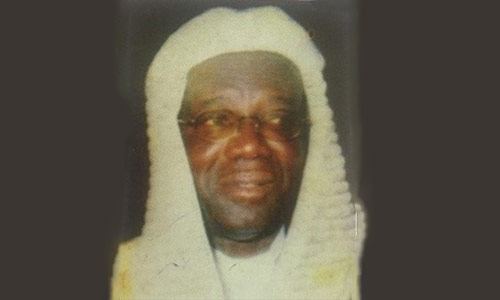 The news broke on the 2nd of April, 2020. Twenty-Four hours before, and it would have entered the realm of fools greetings, … but it was true – the Iroko had fallen.

It was easy to resist the urge to pen an immediate tribute to him – writing for me is inspirational. It can’t be conjured up or summoned at will, and the writing juices had not started flowing (maybe they were on lock-down, like the rest of me). In any event, I didn’t want my tribute to be lost in the deluge that was sure to follow his death. And quite a torrent it turned out – everyone had something or the other to say about him.

I guess everything that needs to be said about him has been written over the last few days. Well, almost… I haven’t said my piece, yet.

I met Dr. Kole Abayomi (as he was at the time) for the first time in my life on or about Monday the 22nd of October, 1990 (following resumption at the Nigerian Law School, Victoria Island, Lagos) when he came into the auditorium, strolled leisurely down the aisle and mounted the stage to deliver his first lecture. I was impressed. Who wouldn’t be – he was almost fifty (years old) at the time, reasonably good-looking, well heeled, and well dressed. Scratch that…he was extremely well dressed. He seemed to take pains with his appearance – choosing his clothes and adorning them with great care and thought.

And he was charming! Genial, soft-spoken (with a well-cultivated lazy drawl), and a manner of caressing his words like he was romancing a woman. And my, did he wow the ladies? He made no pretence of his liking for the fairer sex and enjoyment of their time and attentions. He flirted good naturedly and openly in class – and left us guys wondering whether it was just harmless chivalry… or if he actually did pursue it further.

We had a great crop of teachers in my time at the law school. Every one of them stood out one way or the other, and Dr. Abayomi was way up there at the top of the heap!

He was always impeccable in dress, in speech, in manners – he oozed good-breeding, culture and old-school courtesy – like an English Gent. He was a well-loved teacher – connecting with students, understanding our fears, hopes and expectations, and speaking to us in a language we could admire and yet understand.

I recall our very first class with him. He was one of two teachers who took us on ‘Legal Drafting and Conveyancing’, and the contrast between the other lecturer (late Mr. Adubi – my pal Gboyega’s father…I wonder where he is now?) and him couldn’t have been more graphic – the one sombre and regular in his home-spun suits, and the other larger than life in his bespoke suits and hand-turned walking stick.

Dr. Abayomi mounted the stage and proceeded to give us an overview of the course and a detailed reading list. He stated the topics he would be taking – bibliography, basics, elementary rules of drafting, legislative drafting, leases and assignments of leases, and wills and codicils. His first lecture was on ‘Introduction to Drafting’ and he ended it with words which I continue to hold fast:

“You have an obligation as a draftsman to go for clarity, go straight to the point, avoid ambiguity, clarify words with technical meaning.”

The next day he opened his lecture on Bibliography by hinting us (very helpfully) that ‘bibliography is a sure examination question.’ Although many of his former students appear to remember his lectures on ‘Wills’ more than the other topics he took, I must say that I most thoroughly enjoyed his expositions on ‘Leases, Subleases and Assignment of Leases’. It is to his credit (and also Mr. Adubi’s) that I had a masterly (and, therefore, life-long) appreciation of legal drafting and conveyancing.

He was a charmer, his entire manner oozed of breeding and privilege. I knew he was the scion of old-money – not the flash of nouveau riche. And I remember thinking at the time – why work? Why the thankless job of trying to drum legal knowledge into the skulls of plebs…when he could have afforded to spend his days lounging on the beach in the South of France? And he did give off the impression that he spent his vacations doing exactly that! He made no pretense about his wealth – he wore it everywhere, but in a manner that was kind and inoffensive.

I really liked him back then – of course with a tinge of envy at his seemingly easy and privileged life. A middle-aged man at the top of his game, comfortable in his own skin, appearing unaffected by worldly cares, and able to indulge in the things he fancied! I liked him…and missed him after I finished law school and was called to the bar.

In the years after law school, I didn’t see much of him. I did follow his career and was thrilled when he became Director-General of the Law School and then took Silk – I do wonder, which gave him the greater pleasure?

I remember meeting with him about ten or eleven years ago, when my branch (the NBA Lagos Branch) invited him to deliver the dinner talk at our annual Year-End Bar Dinner. He gladly accepted and came – impeccably dressed as always. He had aged somewhat but was his ever charming, genial self. Unfortunately, the rowdy din in the hall drowned out the delivery of his well-thought out dinner speech – given in his well-known soft-spoken precise grammar. And, yes, he did comment on and deprecate the noise.

With his passage comes two deep and abiding regrets. I wish I had known him more closely, had transcended the teacher/ student relationship and forged a real friendship with him – as a respected much older and senior colleague. I’d always admired his unhurried (very measured) manner of speaking – that soft-spoken modulation that caressed the ear, and wish I could have emulated it.

I also wish he had written his story – left a biography of his life and times. Oh, what a rich tapestry it would have been!

May I end by offering condolences to his widow, children, grandchildren and the entire family – your loss can only be imagined. May I also commiserate with the Nigerian Law School, the Council of Legal Education and the entire legal community – as we mourn an erudite law teacher. I pray that the Greatest Teacher of all – Almighty God – offers his gentle soul sublime repose.

His charm and wit will surely be missed – very much!