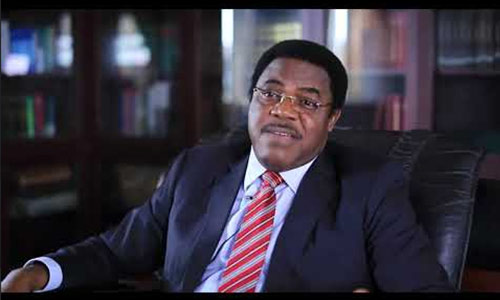 The death struck with total disbelief, said Dele Adesina, SAN as he pays tribute to a bossom friend who died in the cold hands of death, late Granville Abibo, SAN.

The learned silk paid this tribute in a statement issued by him which was made available to TheNigeriaLawyer, titled “TRIBUTE TO GRANVILLE ABIBO, SAN: A FAITHFUL AND LOYAL FRIEND AND A COMMITTED BAR MAN”.

“I received the news of the death of my friend, Granville Abibo, Senior Advocate of Nigeria, with total disbelief. I was rattled, I believe like so many hearers of the shocking news. I asked several questions from no one in particular. How did it happen, when did he die, and Why? Was he sick? If yes, for how long? At a point, I rediscovered myself as it were and I remembered there is indeed no accident in predestination. I also remembered the truism that nobody no matter how powerful can add one second to his life.

In addition, he stated that the circumstances around his death is heartbreaking but however, we must be pacified by being grateful to God.

“While it is conceded that the time and circumstances of the death of Granville called for serious pain and mourning, even in our mourning permit me to remind us all about the words of the Lord which says that in all things we should give thanks. Somebody could also ask why should we be giving thanks? If we realise that some people had died just the way Granville had died without a survivor, wife or children, Granville’s case is not like that. Some people have died without a name, either in their native land or in their chosen career or profession.”

“Granville’s own is not like that. He does not only have a name, he has a good name. Much more the Bible says that a righteous man leaves an inheritance for his children, I recall my high excitement and joy when I visited his office complex in February 2020. It was a beautiful edifice. For these and many more, we must obey the scriptures”, he added.

Mr. Adesina further stated that while he was alive, he “was a very honest, sincere and committed friend. A very loyal, reliable, straightforward and trusted friend. Very loyal to relationship. To him, the greatest virtue in any relationship is loyalty and commitment.”

Similarly, he noted that he is a man with high sense of decisiveness, adding that “As a Bar man, you can take his words to the bank any day. Granville will make his position known on any issue with absolute clarity. As a person, he never sat on the fence. Like me, he believed that a man that sits on the fence on any issue of life is either a coward or a traitor. He was none of these. Rather, he was a great man. In the words of Martin Luther King Jnr., “the ultimate measure of a man is not where he stands in moments of comfort but where he stands in times of challenge and controversy.””

“As a Bar man and a friend, he was demonstrably reliable and dependable. You can take every single word that proceeds out of his mouth as valuable as gold. He was a forthright person, a practical believer in a dynamic and progressive Bar. Granville believed in the kind of leadership of the Bar that will not be consumed by the allure of power but who will be driven by the passion to serve the Bar and better the standard of living of the Nigerian Lawyer. A virile and purposeful Bar that will be willing ready and capable of speaking truth to power knowing fully well that “truth is the foundation of all knowledge and the cement of all society. That on the contrary, false tears society into pieces, only truth cements.” Granville openly pitched his tent with this cause.

“I knew Granville about twenty-one (21) years ago, precisely in 1999, in the course of my consultations to contest the office of the General Secretary of the Bar in year 2000. Since that time, we have remained resolutely together. He was a quintessential Legal Practitioner. An upright man. A man of high sensitivity and integrity. Please let us recognise that the milestone covered by man is measured by his integrity and where he stands when truth and fair-play are in dire need of Advocates.” He added.

Similarly, the learned silk stated that he was an advocate who was steadfast in upholding truth and rule of law.

“Today, in our Nation, our beloved Profession as well as in our Judiciary, truth and fair-play are in dire need of Advocates. Granville was one of such Advocates. In the Nation, the Rule of Law is under present danger. Our Constitutional Democracy is under threat. The independence of Lawyers and Judges to practice their profession is arguably under challenge continually. A highly respected friend of mine, Mr. Reuben Abati, in one of his many thought provoking write-ups had this to say “whatever the colour of the party in power, the Judiciary remains the last hope of the common man, the aggrieved and the victim of persecution.” Mr. Abati continued by saying that “in a country where noise is more important than reason, where allegations are packaged as truths, where villians behave like victims, the Judiciary should always seek to remain the voice of reason, truth, justice, equity and good conscience.””

“For our beloved Professional Association – the Nigerian Bar Association – anticipating change and preparing for it is one of the strong points of a forward looking organisation. Indeed, one of the tests of credible and progressive leadership is to be able to recognise a problem before it becomes an emergency. Permit me to say, that there is a problem in our Judiciary, in our Profession and in our beloved Nation. The time to recognise these facts and begin to find credible and creative solutions to them is now. Each new day is an extra privilege to an individual, an organisation or a Nation. Each new day, we are opportuned to see is a fresh start and a new opportunity. It is an opportunity to correct whatever mistakes we have made”, he added.

Recalling his experience with the deceased, he said when he “visited Port-Harcourt in February, this year, Granville and I were together for better part of the period of my stay. He presided over some of the meetings I put together to sensitize our members towards the 2020 NBA Elections as it concerned my candidature. You can therefore imagine the enomity of my pain when this tragedy struck.”

Meanwhile, he sends his condolences and noted that the deceased death is a tragedy.

“The truth is that Granville’s death is a tragedy but I have a word of consolation to the family, to the staff of his Chambers, the members of Nigerian Bar Association Port-Harcourt Branch, and the Body of Senior Advocates of Nigeria of which Granville Abibo, SAN was a senior member that: “when Satan who is the author of death is at his worst, as in this case, God is at His best and this God who is the Almighty, the All-Sufficiency, the Alpha and the Omega, I am fully persuaded that His presence will fill the enormous vacuum that Granville’s transition has left behind.” He shall be the father of the fatherless and the husband of the widow”, he said.

“I thank the members of the family and the organisers of this well deserved tribute for the privilege and honour to pay this tribute to a great and selfless friend. A good man. I wish him a perfect rest in the Lord’s bossom”, he concluded.