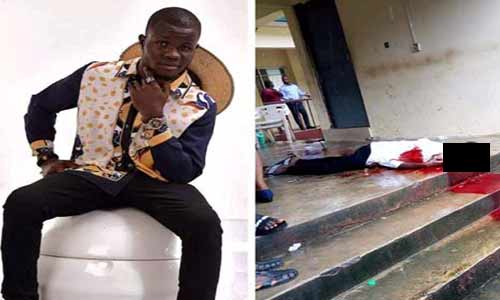 Tragedy struck in Cross River State University of Technology (CRUTECH) as a final year student of Electrical Engineering was shot and killed by a suspected rival cult group.

The student, simply identified as James, was shot on Monday at about 12 noon shortly after writing his first-semester examination at the old Engineering Block, Calabar Campus of the university.

The incident threw the entire institution into panic as a good number of students flee for fear of reprisal attacks.

A witness, Idoreyen Essien, who spoke to our correspondent on phone, said James’ assailants were seen hovering around spotting dark goggles and pretending to be busy with their phones not knowing that they were targeting him.

“On sighting James coming out from the examination hall, they shot him three times but the bullets could not penetrate him.

“Suspecting that James must have take a native medicine, popularly known as “odeshi,” his attackers hacked him down with a machete and an ax until they ensured he gave up the ghost before they fled.”

Sources close to the department said realising that a student had been killed at the Electrical Engineering Department, some lecturers announced in various halls were final year students were writing their examination that anybody who was a cult member had better submitted their answer sheets and fled.

Following the announcements, suspected cultists hurriedly submitted their answer scripts and moved out in groups.

Confirming the incident, the Cross River Police Public Relations Officer, DSP Irene Ugbo, admitted that the killing if the final year student in CRUTECH was cult-related and the Divisional Police Officer of Efut, Mbukpa had deposited his body in the mortuary.

She said the command had deployed security men there just as investigation had already started.

The Public Relations Officer of CRUTECH, Mr Onen Onen, could not be reached as he was said to be out of town.