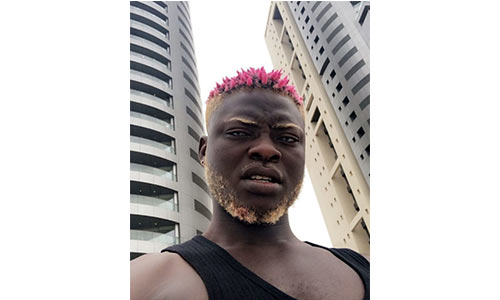 The Osun Osogbo Sacred Grove, located on the outskirts of the Osun State capital, is a UNESCO World Heritage site recognised for its cultural value and significance.

Tblackhoc was arrested alongside four Nigerians and a Cameroonian for the alleged offence, which also included sharing the controversial video on social media.

She also said he was arrested following a complaint filed by a member of the Traditional Religion Worshippers Association in Osun State.

‘‘Awosunwon of Idinleke Temple, Osogbo, reported to the us that he sighted Tblakhoc dressed in Osun traditional attire in a sex movie with a naked young lady shared on the social media. You will have to call me back tomorrow morning for an update on the court ruling,’’ she added.

He was also arrested for using Ifa worshippers’ items in the video.

‘‘The accused persons are being prosecuted for acting in a film which appeared on the face of it to bear a pornographic picture of young girls who were half-naked and thereafter published or sent for public consumption,’’ the charge sheet read.

The prosecutor alleged that the accused persons conspired amongst themselves to act at the Osun-Osogbo traditional and religious ground and commit a misdemeanour to wit insult to religion.

The six accused persons pleaded not guilty to the allegations slammed against them.

One of the accused told the court that they only went to the shrine for excursion and only took pictures.

The defence counsel, Tunbosun Oladipupo, applied for the bail of the accused persons in liberal terms saying that the allegations are bailable offences.

The court ruled that the six accused persons be remanded in the Ilesa correctional centre.

The judge adjourned the matter till September 17 for ruling on bail.