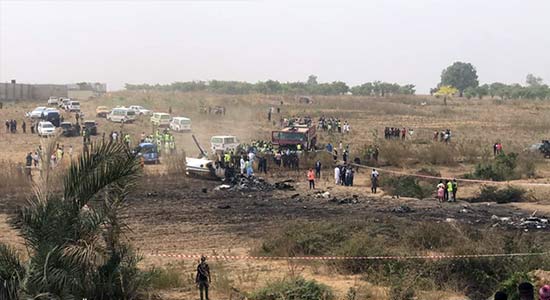 The Chief of Air Staff (CAS), Air Vice Marshal Isiaka Amao, has disclosed that the Beechcraft King Air B350i which crashed with seven crew members on Sunday was at the Nnamdi Azikiwe International Airport, Abuja, to refuel.

The NAF aircraft which was on its way to Minna, Niger State, had reported engine failure before it crashed short of the runway.

The CAS said the deceased personnel had been in Minna for days conducting Intelligence, Surveillance and Reconnaissance missions in connection with the efforts to secure the release of the 42 students and staff abducted from the Government Science College Kagara, Niger State.

Speaking while receiving the Minister of Women Affairs, Mrs. Pauline Tallen, who paid a condolence visit to the Nigerian Air Force (NAF) headquarters yesterday, Amao further said the aircraft had carried out several Intelligence, Surveillance and Reconnaissance missions in virtually all the theatres, including the North-East, North-West as well as the North-Central.

According to a statement by the NAF spokesman, Air Vice Marshal Ibikunle Daramola, titled, ‘Minister of Women Affairs, Dame Pauline Tallen pays condolence visit to NAF, commiserates with CAS,’ Amao thanked the minister for finding time to commiserate with the NAF on the unfortunate incident.

He said, “it was a sad Sunday for the entire NAF family, which had lost a set of fine, well-trained, dedicated personnel, who in the course of conducting Intelligence, Surveillance and Reconnaissance missions, had operated in virtually all theatres, including the North-East, North-West as well as the North-Central.

“The deceased personnel, who had been in Minna for days conducting ISR missions in connection with the concerted efforts to secure the release of the students and staff abducted from the Government Science College Kagara, Niger State, had only stopped at the Nnamdi Azikiwe International Airport, Abuja to refuel before embarking on the fateful return flight to Minna, when the unfortunate incident occurred.”

While describing the incident as one of the hazards of the military profession, the CAS lamented that the NAF would find it difficult to replace the personnel based on their training and experience acquired over the years.

He said the service was, nevertheless, consoled by the fact that the deceased personnel gave their utmost in service to the nation.