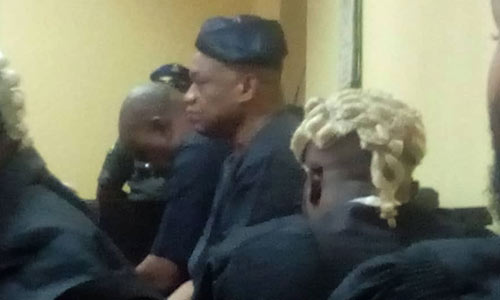 The Federal High Court in Lagos on Thursday convicted a former governor of Abia State, Orji Kalu, of N7.1bn fraud and sentenced him to 12 years’ imprisonment.

The judgment, delivered by Justice Mohammed Idris, came 12 years after the Economic and Financial Crimes Commission filed fraud charges against Kalu in 2007.

Kalu was convicted alongside his firm, Slok Nigeria Limited, and Jones Udeogu, who served under him as the Director of Finance and Account at the Abia State Government House in Umuahia.

While Udeogu was sentenced to 10 years’ imprisonment, the judge ordered the winding up of Slok Nigeria Limited, holding that his assets and properties be forfeited to government.

Justice Idris said the sentences shall run concurrently, meaning that Kalu will spend 12 years in jail.

He said the sentences would run concurrently, meaning that Udeogu will spend 10 years in jail.

In respect of Slok Nigeria Limited, Justice Idris pronounced, “An order is hereby made that the third convict shall without further assurances but from this order be wound up and all the assets and properties forfeited.”

In pronouncing the convicts guilty, Justice Idris said the EFCC proved its case beyond reasonable doubt, saying, “I, sincerely, cannot find my way clear in finding these defendants not guilty of the offences charged.”

The judge hailed the investigation crystallising into the charge as in-depth and conclusive, saying “No gaps were left unfilled. This is the acceptable standard.”

“In totality, I, sincerely, cannot find my way clear in finding these defendants not guilty of the offences charged. Having reviewed all that has been provided by the prosecution in terms of oral and documentary evidence, I am inclined to resolve the singular issue for determination in favour of the prosecution herein.”

While saying that the judiciary was committed to the fights against corruption, the judge said it was left for the prosecutorial agencies to conduct thorough, comprehensive and conclusive investigations before coming to court