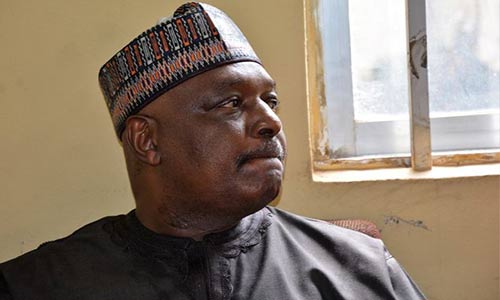 The National Industrial Court has ordered the payment of the sum of N151.1 million being the unpaid pension arrears of ex-governor of Taraba, Rev. Jolly Nyame and three others from May, 2013 to Oct.2015.

The other claimants in the suit were Uba Ahmadu, Abubakar Armayau and Bilkisu Danboyi.

The judge, Justice Sanusi Kado in a ruling on an application brought by the claimants counsel, Mr Uchenna Okeke entered a summary judgment in favour of the claimants

Okeke’s application which was brought in pursuant to Order 34, Rule 4 of the NICN Civil Procedure Rule, 2017, sought for an order of court to enter summary judgment against the defendant, the Taraba State government, compelling the defendant to pay the balance of his clients pension arrears within four months.

The application was however opposed by the defence counsel, Mr Emmanuel Anderifun in a counter-affidavit.

Kado in the ruling granted the summary judgment.

He said the sole issue for determination was the number of times the defendant will make the payment in instalments.

He further stated that the defendant had always admitted owing the claimants the said amount.

The judge added that facts admitted needed not to be proven by evidence or further proof.

Kado said the bone of contention was the number of time the payment would be made.

He said the claimants demanded for their payment in four instalment payment while the defendant proposed 18 installments.

The judge ruled thus” the decision of the court is for 10 equal instalments payment commencing from July. 2019 on a monthly basis until the final liquidation of the total sum.

“Failure to abide by the decision of the court will attract 10 per cent interest rate for the defendant.

The claimants who were former employees of the defendant upon retirement were paid the sum of N45 million out of their total pension arrears of N196 million.

They therefore, approached the court to seek redress after every efforts to get the balance of their pension arrears failed.

The Attorney-General of Taraba was a co-defendant in the suit.

On May 31, 2018, Justice Adebukola Banjoko of the High Court of the Federal Capital Territory in Gudu, Abuja, sentenced Nyame, to 14 years’ imprisonment for his acts of criminal breach of trust and misappropriation of the sum of N1.64bn belonging to the state.

The judgment marked the end of about 11 years’ trial which would be the first full-blown criminal proceedings to be conducted in a Nigerian court and ended in a guilty verdict sending a former governor to jail for a period as long as 14 years for corruption.

Nyame, was convicted and sentenced to various terms of imprisonment with the highest being 14 years for offences bordering on criminal breach of trust, criminal misappropriation, and taking valuable thing without consideration and receiving gratification as a public officer.

The sentences were the maximum provided by the law under which the convict was charged in May 2007.

Who Is A Reasonable Person In Nigeria?