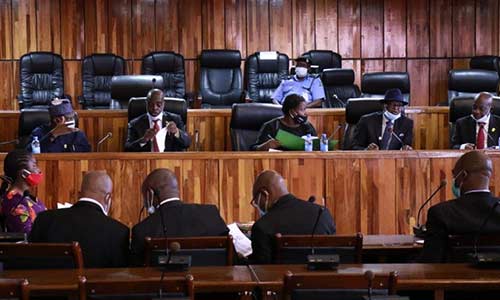 …We are re-adjusting over COVID-19 threat – NHRC spokeswoman

The Independent Investigative Panel (IPP) constituted by the National Human Rights Commission (NHRC) on the directive of the Federal Government (FG) to probe rights abuse and other unethical conduct by officials of the Nigeria Police Force (NPF) has put off its planned resumption.

Our correspondent learnt that members of the IIP, which was constituted in the wake of the #EndSARS protests, had observed the Christmas and New Year breaks and were expected to resume sitting on Monday.

But, when newsmen got to the panel’s sitting venue on Monday, the door to the hall was locked, without any indication that it would sit.

Upon enquiry, it was gathered that members of the panel elected to put on hold its planned resumption, because they have not been paid their allowances.

A source close to the panel said members were expected to arrive Abuja at the weekend preparatory to the resumption of the panel’s sitting today, but they were told not to come yet because resources were inadequate.

“The panel has nine members, who are from across the country. They come from Lagos, Gombe, Enugu, Port-Harcourt and so on. The panel is expected to seat for six months. It has sat for three months, having commenced sitting since October last year.

“The panel has received over 300 petitions and it is still receiving more across the country. It seems Nigerians prefer the panel to those sitting in states.

“It (the panel) has a lot to attend to, but it is suffering from inadequate funding. That is why it may not resume sitting anytime soon, until the issue is addressed, “the source said.

But, the NHRC gave a different reason why the panel suspended its sitting to “a date to be announced later.”

NHRC’s spokeswoman, Mrs. Fatimah Agwai Mohammed said the postponement of the panel’s resumption was to enable it put in place measures in compliance with the Federal Government’s COVID-19 protocols.

“It is not true that funding is responsible. We decided to re-adjust the panel’s activities in view of the increasing threat of COVID 19. We don’t want to put our staff, panel members, complainants and their lawyers at risk.

“We have decided to suspend proceedings pending when we are able to put in place all the necessary measures to ensure we operate at no health risk to anybody.

“We are currently also re-adjusting our cause list to reduce the number of petitions to be taken daily, while also working on the duration of sitting daily,” she said.

She however said the commission requires additional funding to enable it put in place all it needs to ensure that everyone is safe before the panel resumes sitting.

“Honestly. I do not know exactly when the panel would resume sitting. We want to ensure that all necessary measures are in place. That of course requires more funding, “the NHRC’s spokeswoman said.