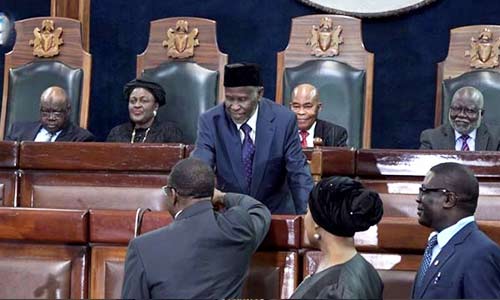 Mr Muhammad presided over the swearing-in ceremony that lasted about 25 minutes at the ceremonial court of the Supreme Court in Abuja.

Mr Garba, who hails from Malumfashi Local Government Area of Katsina State, previously served as the Chief Registrar of the FCT High Court until he was appointed a judge of the court 1998.

He was until Tuesday the second most senior judge of the FCT High Court ranking after the just-retired Chief Judge of the court, Mr Ishaq Bello.

His predecessor, Mr Bello, who hails from Kaduna State, was appointed the Chief Judge of the court in 2015 and exited on attaining the mandatory retirement age of 65 on Tuesday.

Mr Bello had retired on Tuesday with immediate approval of President Muhammadu Buhari for his successor.

The presidential approval, which the National Judicial Council announced only few minutes to midnight on Tuesday, came only hours after Mr Bello had officially retired from office.

The CJN ,who spoke for about 21 minutes at Mr Garba’s inauguration on Wednesday, recalled that he was a former Chief Registrar of the FCT High Court.

He said he knew the new acting Chief Judge of the FCT about 25 years ago when they were both working as employees of the court.

He vouched for Mr Garba’s uprightness, integrity and diligence, describing him as a person who “is well-grounded in that system”.

“I am sure you are really equal to the task,” the CJN told Mr Garba.

He also charged the new top judge of the FCT to adhere strictly to the oath of his office.

He said, “You should remember that the oath you have just subscribed to is a convenant between you and your creator, the Almighty Allah.

“I urge you to hold tenaciously to it. Endeavour not to be tempted to violate it.

“As we all know, even the deepest and cloudiest part of our hearts, God sees through. We cannot afford to pretend about our intentions.”

The CJN, who acknowledged Mr Bello’s presence, noted that Mr Garba took over from him “not by a coup but through due process”.

Mr Garba was called to Bar in 1984 and completed his National Youth Service the following year.

He was in active law practice between 1985 and 1989, before he was appointed as a magistrate in the FCT High Court, Abuja in 1989.