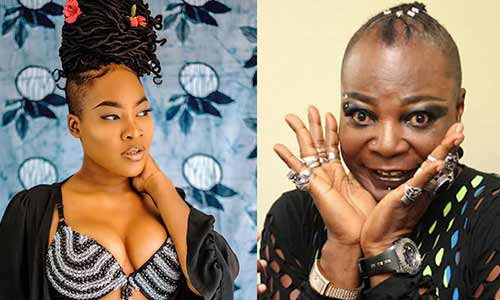 Charly Boy Oputa and his lesbian daughter,Dewy,were locked in a war of words on the social media on Friday after the entertainer said he was in total support of the LGBTQ community and he had Dewy Oputa to thank for the experience of being a father to one.

“As a matter of fact, I now look back and find that I am grateful for the experience of having a gay or lesbian child,” the 69-year-old activist said on his Instagram handle.

Expressing love to Dewy, who lives in Atlanta, United States of America, Charly Boy said, “All I want is my Princess’ love, happiness, and success in her life. Anything else is secondary. I told myself that I will get through this, and many months later I did.”

When Dewy came out to him, Charly Boy recounts him having mixed feelings before accepting her decision.

He said, “Nothing can come between me and any of my beautiful children.”

“It is stupid to even think that having a gay child means that parents have failed. That’s some pedestrian thinking. Me, I love my gay daughter o, I love you Dewy,” he stressed four years after receiving the news of his daughter’s sexuality.

Recounting the experience from the day he received the news, Charly Boy, who is famous for being a crossdresser and non-conformist, said it was tough because he had so many thoughts running through his mind but decided to go with the happiness of his daughter.

“About 4yrs ago, my last Princess of the house called me from America, from her tone I was bracing up for whatever she was about to tell me especially when she kept saying to me, “daddy promise me you won’t get mad at me, or give up on me,” he began.

“I am close with my children and I love them to bits. They are my friends. But I wasn’t really ready for the “breaking news” my Princess Dewy had for me.

When my child told me she is gay, a lesbian, I experienced a range of emotions, during that phone conversation.

“So many things went through my mind, one of them included self-blame (“Did I do something wrong?”) (“The child I thought I knew and loved no longer exists.”), worry (“Will my child be discriminated against?) religious confusion (“Is my child damned to spend eternity in hell?”), and stigma (“What will people think of my child? Of me?”),” he expressed.

Honestly I was going to just free this situation because I’m used to this toxicity and mentally I’m tired but after seeing this i can’t stomach this pretentious behavior anymore because on a normal level this man no Dey even pick my call. pic.twitter.com/Bc80xM9iOm

The non-conformist was quick to say he had to accept the news without resentment because he didn’t want a strained relationship with his daughter over her sexuality. “However, I kept pinching myself to calm down because I didn’t want my baby to shy away from me or for us to have a strained relationship. I loved my baby far too much. I first took a deep breath. And all I could say was, “are you sure?” I was hoping it was a prank but it was happening in real-time.

“Even though I was unusually calm through that conversation, my mind was wandering in all directions.”

It did not take long for Dewy to respond to her father’s ‘expression of love’.

Writing on her Twitter account @DEWYOPUTA,she said:” Gaslighting at its finest. It’s quite unfortunate that my life is nothing but content I just can’t wrap my head around the hypocrisy. All this for a drop of clout,attention and praise from strangers just to feed your ego.

”Honestly I was going to just free this situation because I’m used to this toxicity and mentally I’m tired but after seeing this i can’t stomach this pretentious behaviour anymore because on a normal level this man no Dey even pick my call.

”2017 I got kicked out of the house and was damn near homeless and if not for my friend I wouldn’t have even had food or Shelter!

“Fortunately for me, I had a return ticket to come back to Atlanta, I moved back here with zero dollars not even knowing where I was going to live or where my next meal was going to come from!

“I was literally living couch to couch and lord knows how tirelessly I worked so I could have my own stability!

“You didn’t even know if your daughter was dead or alive anything could have happened to me.”