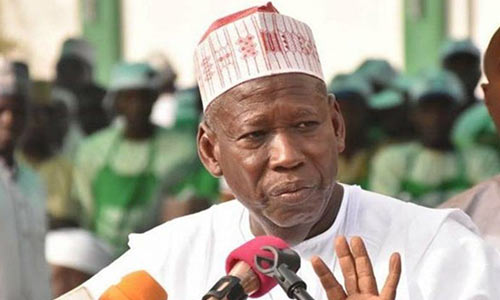 Kano State God has described the claim that Governor Abdullahi Ganduje dethroned Muhammadu Sanusi II, the former Emir of Kano on the instruction of President Muhammadu Buhari as baseless and untrue.

Musa Kwankwaso, former Kano State Governor had in an interview with the BBC Hausa Service, on Wednesday claimed the former Emir was removed from office on the instruction of President Buhari.

But in a statement signed by Abbar Anwar, the Chief Press Secretary to Governor Abdullahi Ganduje on Wednesday afternoon, the Kano State Government said there was no external inteference in the removal of Ganduje.

Anwar said the removal of the Emir was because he violated Part 3, Section 13 (a-e) of the Kano State Emirate Law 2019. if left unchecked would destroy the good and established image of the Kano Emirate”.

“This Law is Kano State Law, not that of the federal government. So there is no point at all in linking this punishment with any other organ apart from Kano state government,” he challenged.

“So I wonder when someone would just appear from somewhere and alleged that the Presidency has a hand in Muhammadu Sanusi’s removal. Reasons behind his dethronement were stated clearly without any ambiguity,” Governor Ganduje said.

He added that whoever links the Presidency with the dethronement of the Emir must have ulterior motives not in tune with reality.

“Nigerians could recall that, few weeks back His Excellency President Muhammadu Buhari made categorical statement through his Senior Special Assistant on Media and Publicity, Garba Shehu that, he didn’t have any constitutional right to delve into Kano Emirate matters,” the Kano State Government said.