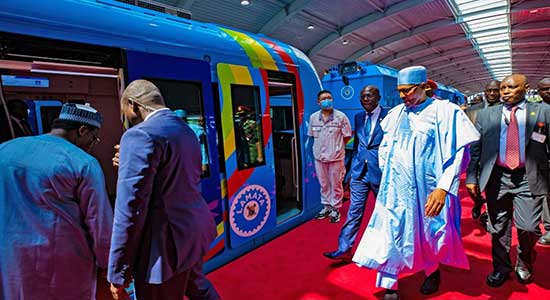 President Muhammadu Buhari yesterday completed his two days working visit to Lagos State with inauguration of the phase one of the Blue Line Rail of the Lagos Rail Mass Transit (LRMT) initiative.

The 13km line (phase one) runs from Marina to Mile 2, with five stations of Mile 2, Alaba, Iganmu, National Theatre and Marina.

Apart from the commissioning of the Lagos rail project, the president also unveiled the J Randle Centre for Yoruba Culture & History at the Onikan in Lagos.

Buhari also witnessed the signing of the Memorandum of Understanding (MoU) for the second phase which will run from Mile 2 to Okokomaiko.

President had in the previous day commissioned the Lekki Deep Sea Port, the Lagos Rice Mill , Imota among others in the programme tagged Festival of Commissioning at the banquet organised by the state government in his honour commended Governor Babajide Sanwo-Olu on the landmark projects.

He described the Governor as a, ‘’ True Ambassador of progressive politics.’’

The 27km Blue Line rail route is one of the six metro lines identified in the LRMT master plan ad contained in the Lagos State Strategic Transport Master Plan (STMP).

The iconic Marina station, being the largest train hub in Africa, is 240 metres long, and equipped with two concourses of 12 turnstiles each with a processing capacity of 480 passengers per minute and over 24,000 per hour. Travel time on the Marina – Mile 2 route is about 15 minutes. It will be powered by high voltage electricity (750VA).

He disclosed that the President granted the State waivers on customs duties to import infrastructure equipment and trains for the project.

Sanwo-Olu said, ‘’I want to thank you for your commitment and support you have given us. You mentioned it last night and I think it is important for us to mention it again that you have given us waivers, you have given us clearing waivers on Customs duties to bring our trains in for this project. You are a forward looking president that when we have people oriented, driven programmes , you are willing to support us all the time.
“The completion of the Blue Line here, the first rail system by a sub-national in Africa, is a Sea crossing. It’s a testament that indeed, the dark days of oppression are behind us as a government and what we will be commissioning here today (Tuesday) is the first phase.’’

According to Sanwo-Olu, the rail infrastructure is “expected to cover less than 15 minutes as compared to a journey time that hitherto will take about an hour and a half to two hours.”
He disclosed it has the benefits to reduce travel time, improve the quality of lives of citizens “and will make Lagos one of the most resilient cities not only in Africa, but to compete with other mega cities in the world.”

Sanwo-Olu who emphasised that the Blue Line is to be powered end to end by high voltage electricity, supplied by delegated independent power with a back-up system, said the train has the capacity to transport per hour, an average of 25,000 passengers.

He disclosed that the Red LIne which is larger in extension would be commissioned before the end of the Buhari’s Administration.

Also speaking, the Deputy Governor, Lagos State, Dr. Obafemi Hamzat described the project as the “most audacious rail project to be funded by a sub-national government” in Nigeria, saying that it is not surprising that the landmark Blue Rail would reduce pressure on road and put the State on the pedestal of other cities around the world.