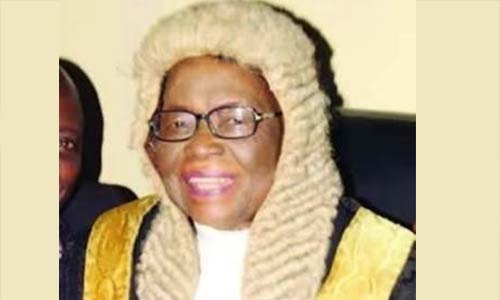 The Body of Senior Advocates of Nigeria (BOSAN) has mourned the death of Chief Mrs. Phoebe C. Ajayi-Obe, SAN who died on 28th day of June, 2020.

This is contained in a statement signed by the BOSAN Secretary, Seyi Sowemimo, SAN which was made available to TheNigeriaLawyer.

“The BOSAN Secretariat wishes to announce the demise of Chief (Mrs.) Phoebe C. Ajayi-Obe SAN, who died in the early hours of yesterday, 28th of June, 2020.”

It was revealed that she was elevated to the rank of Senior Advocate of Nigeria in the year 1989 which saw her as the 1st Female SAN In Eastern Region & 2nd Female SAN In Nigeria.

“The late Chief (Mrs.) Phoebe C. Ajayi-Obe (Nee Erinne) born on the 21st of March, 1928 (92 years), called to the Nigerian Bar in July 1969, admitted to the Inner Bar in 1989. She was the first female Senior Advocate from the old Eastern region and the second female legal practitioner in Nigeria to be conferred with the rank of Senior Advocate. She was a native of Okija, in Ihiala Local Government, Anambra State.”

Furthermore, it was revealed that the late SAN was equally the first female to have graduated from Faculty of Law, Obafemi Awolowo University, Ife (then University of Ife).

“She attended St. Monica Girls School, Ogbunike, near Onitsha, Anambra State, and Women Training College, Umuahia, Abia State. She was the first female graduate from the faculty of law, at University of Ife. She married Chief (Dr.) Oyedokun Ajayi-Obe from Ilesha, Osun State.”

In addition, the statement noted that the deceased had been in the law practice at Ibadan, Oyo State where she launched a book written by her at her 90th Birthday.

“Chief Mrs. Phoebe C. Ajayi-Obe SAN had her law practice in Ibadan, Oyo State and on the 21st of March, 2018, launched her book titled: “Icon on the Niger” at her 90th Birthday celebration.” He said.

Further information on the funeral arrangements as released by her family will be communicated in due course.” It was added.

“May the soul of Chief (Mrs.) Phoebe C. Ajayi-Obe SAN and the souls of other faithful departed Rest in Peace. Amen” The statement concluded.