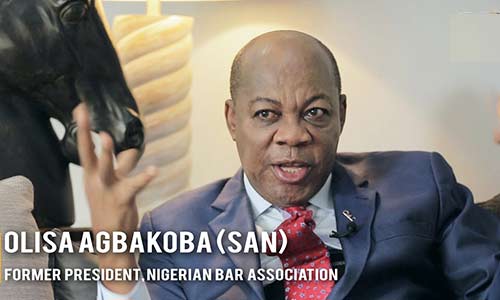 Former President of the Nigerian Bar Association (NBA), Dr Olisa Agbakoba (SAN), has charged presidential candidates of all the political parties in the 2023 General Elections to be specific on how they hoped to go about solving Nigeria’s multifarious problems.

Agbakoba gave the charge on Tuesday in Lagos during the presentation of Olisa Agbakoba Legal (OAL)’s Policy Report 2022, titled: “Big Issues for the 2023 General Election,” listing the problems to include lack of unity, disorder and insecurity, as well as rising debt in the country and shrinking revenue, among others.

This was just as the legal luminary said the manifestoes were generally good and issue-based but could be made better by spelling out in detail how they hoped to address the knotty issues bedevilling the country.

“The 2023 General Election is a defining moment for who would preside over the country’s affairs after President Buhari’s administration.

“Overall, we are happy to note that this is one of the first presidential elections in that issues are coming to the fore, and that is how it should be.

“OAL’s Policy Paper 2022 has highlighted a few of the big issues that should engage any presidential candidate interested in leading Nigeria, some of which include: lack of unity, disorder and insecurity, and they must be tackled head-on.

“The other big challenge is the weak legal institutional and regulatory framework; this needs to be strengthened.

“The third is the economy especially as it relates to the rising budget deficit, debt and shrinking revenue. Nigeria needs innovative and transformational tools to deal with all the issues highlighted in this report. Our contribution here is to make suggestions. Presidential candidates are to rethink some of the issues, especially that of poverty,” Agbakoba said.

Speaking at a press conference he jointly addressed with Collins Okeke, associate partner at OAL, Dr Agbakoba said that the presidential candidates owed the duty of reversing the unfortunate figure of 133 million Nigerians living in multi-dimensional poverty, according to the report by the Nigerian Bureau of Statistics (NBS).

According to him, the manifestoes possessed by the various presidential candidates jostling for the topmost seat in the country must be geared toward addressing the pressing needs of the Nigerian people and not just a document for the sake of it, maintaining that most of them were making general statements and not how they intended to reverse Nigeria’s alarming poverty.

“Apart from general statements, most presidential candidates have not said how they intend to reverse Nigeria’s alarming poverty. The National Bureau of Statistics (NBS) has disclosed that 133 million Nigerians are multi-dimensionally poor. This represents 63per cent of the nation’s population.

“According to the NBS, half of this poor population cook with dung, wood, or charcoal, rather than clean energy. Deprivations are apparent in sanitation, healthcare, food security, and housing,” he said.

Speaking further, Agbakoba, noted sadly that Nigeria was in an extremely fragile state currently, saying that available indices showed characteristics of a failing state as, according to him, there are conflicts and agitations everywhere, feelings of marginalisation and exclusion, a rise in political and criminal violence, among others, insisting that “these troubling realities make the 2023 polls a defining moment for the country which, in turn, raises the need for a thorough and insightful search for who would succeed President Muhammadu Buhari.”

“Nigeria is in an extremely fragile state. Available indices show characteristics of a failing state. There are conflicts and agitations everywhere, feelings of marginalisation and exclusion, a rise in political and criminal violence, loss of control of borders, rising ethnic, religious, and cultural hostilities, weak institutions, food shortages, unemployment, inflation, crumbling infrastructure, deteriorating human development indicators such as infant and maternal mortality, and literacy rates.

“These troubling realities make the 2023 General Election a defining moment for the country which, in turn, raises the need for a thorough and insightful search for who will succeed President Buhari. The candidate who emerges as President must understand all the issues and have a clear vision of where to take the country. OAL has read and followed the manifestoes and issues of all the presidential candidates and is happy the campaign is issues-based, unlike previous elections,” he said.