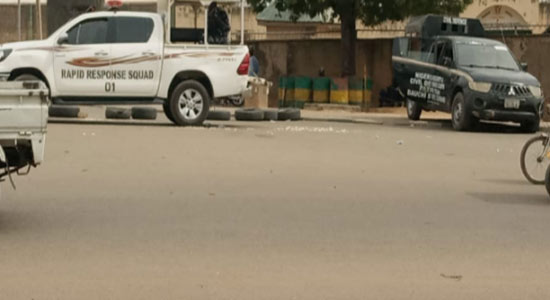 The Nigerian Correction Service has said the attempted jailbreak at the Bauchi State Command on Friday, April 9, 2021, emanated from the attempt of an officer to smuggle a mobile phone into the custodial centre for the use of inmates.

The Service said a struggle occurred between the inmates who were to benefit from the illegal deal and other staff who busted the plan and enforced the centre’s rules and regulations.

During the struggle, two personnel and five inmates sustained injuries. They have since been discharged from the facility’s medical unit where they were treated.

This was disclosed in a statement published on the website of the NCS on Saturday, April 10, 2021.

The statement read, “A little skirmish broke out at the Bauchi State Command of the Nigerian Correctional Service on Friday, April 9, 2021. This emanated from the attempt of an officer to smuggle a mobile phone into the custodial centre for the use of inmates.

“This is clearly illegal and against the rules. The officer has therefore been apprehended and is being interrogated.

“The scuffle occurred between the inmates who were to benefit from the illegal deal and other staff members who enforced the centre’s rules and regulations and busted the plan.

“However, two personnel and five inmates sustained injuries in the melee but have been treated and discharged from the facility’s medical unit.

“The restive inmates have also been put under control while the staff involved is undergoing interrogation, as ordered by the State Controller. This regrettable development is being investigated.

“While addressing the body of staff, the Controller once again reminded them of the far-reaching implications of smuggling prohibited items, particularly mobile phones, into custodial centres which, among other things, could lead to a riot, jailbreak and others. Mobile phones can be used by inmates to commit crimes or coordinate criminal activities. This will set back the task of reformation of the inmates, the raison d’etre of the correctional service.

“He also noted that the Nigerian Correctional Service Act, 2019 has made provisions for sanctioning anyone found culpable of the offence of trafficking. He, therefore, admonished the personnel to shun such shameful act and concentrate on the task of character reformation for which they were employed. He, however, noted that the Service only has a place for personnel sold to the goals of keeping society safe from offenders and reforming them into better citizens while in custody.

“He commended the officer-charge of the custodial centre and the staff members for the excellent display of professionalism that prevented the smuggling of contraband into the yard.”