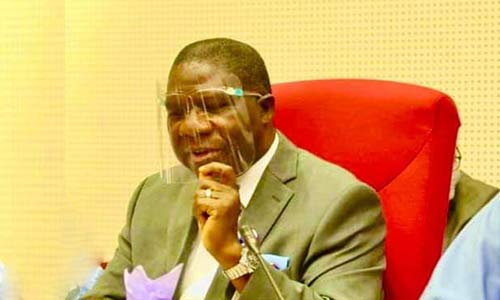 While Bamidele argued that it had become a practice to borrow to finance critical infrastructure, Ndume faulted Buhari’s borrowing plan, describing it as disturbing and worrisome.

The senators expressed divergent position on the deficit budget in separate fora, though commended Buhari’s proposal to the National Assembly, which prioritise spending on security and infrastructure.

At a session with journalists yesterday, Bamidele clarified that attempt by Buhari to borrow to finance the 2022 budget “is in tandem with the international best practices.”

“Borrowing to fund critical infrastructure aspect of the economy that can generate more employments and revenues remain the best panacea to the dwindling Nigeria’s economy. Nigeria has no alternative to borrowing at this period.”

Bamidele noted that borrowing to fund critical areas of the budget has become a practice globally, commending Buhari for adding N370 billion to fund humanitarian policies regarded to be crucial to Nigerians.

He said: “I know that we have to be concerned with our level of deficit, I mean borrowing. But where is the alternative at this time? How do we fund our budget?

“The issue now is whether to fold our arms and watch and just pay salaries of workers and abandon other critical areas, which I know Nigeria cannot do because it would further worsen our situation, or we face the reality that confronts us as a people.

“Nigeria is a member of the International Monetary Fund and contributors to the World Bank. What will now be the benefit of this? We did not pray for COVID-19. It came and devastated the world economy. We must find a way to get out of the present situation.

“What we will not accept is borrowing to fund consumables. It has to be for the provision of Infrastructures that can generate more revenues and employments. We are assuring Nigerians that the National Assembly would ensure full implementation of the budget for the overall interest of all Nigerians,” he said.

In a statement he issued yesterday, Ndume noted that the federal government could save more money, by cutting cost and reducing annual overhead.

He said the Presidential Economic Advisory Committee and finance experts should be actively involved in the debt management and re-evaluation of our debt profile.

The former senate leader added that loopholes in the various Ministries, Departments and Agencies (MDAs) could be blocked.

Ndume, the Chairman of the Senate Committee on Army said: “The proposal to finance the budget by borrowing more is worrisome. The Government should cut down personal and recurrent costs; increase our revenues and plug all leakages.

“In this year only N1.759 trillion had been expended for capital as of August 2021, while N2.87 trillion was spent on debt service, and N2.57 trillion on personnel cost, including pensions. This performance even though it represents improvement on previous year’s performance cannot trigger effective and visible economic recovery.

“The president should pay more attention to the effective, transparent, and accountable implementation of the budget by the MDAs when passed so that the impact will be visible to Nigerians.

“The National Assembly should also be more active in the discharge of its oversight function to ensure effective implementation of the budget.

“The 2022 budget estimate when passed and effectively implemented can accelerate the recovery of our economy and attain more inclusive GDP growth that would lift millions of our citizens out of poverty,” Ndume said.