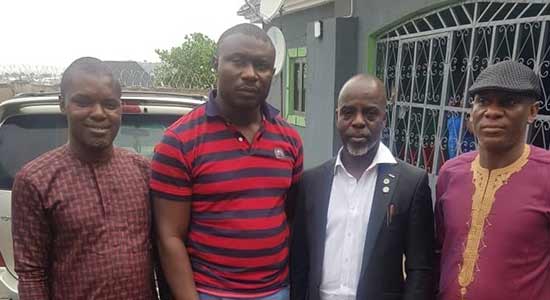 This is contained in a statement made available to TheNigeriaLawyer signed by its National Publicity Secretary, Dr. Nduka.

The visit was pursuant to the attack on the Vice Chairman by some unknown gunmen. The NBA delegation was led by its 1st Vice-President and Welfare Secretary who called for the arrest of the culprits

“On the 7th day of April, 2021 the leadership of the Nigerian Bar Association received the unpleasant news of the attack on the NBA Gwagwalada Branch Vice Chairman – Mr. Aigbefoh David, by unknown gunmen.

“Consequent upon the above, the leadership of the NBA led by its 1st Vice President and the Welfare Secretary, has paid a visit to the said NBA Gwagwalada Branch Chairman, who miraculously survived the attack.

“The delegation, which was received at the house of the said Vice Chairman also had the Divisional Police Officer of the Gwagwalada police station present, where it made a stern demand for the apprehension of the culprits responsible for the dastardly act, and decried the deteriorating state of national security.” the statement reads

The Vice-chairman, in a video made available to TheNigeriaLawyer, said the kidnappers came with sophisticated weapons and broke through his first and second gates. They also fired at his security door and gained access to the sitting room.

He said he battled with them for more than 30 minutes. He used cutlass and injured one of the kidnappers

“I had a runny battle with them for more than 30 minutes. I fought with them by God’s grace. I injured some of them. You can see the blood stain on the ground” he said while showing the blood stains on the floor and walls.

He added while showing more stains on the floor that “I am not sure that this person is going to survive it. I used machete to machete them”