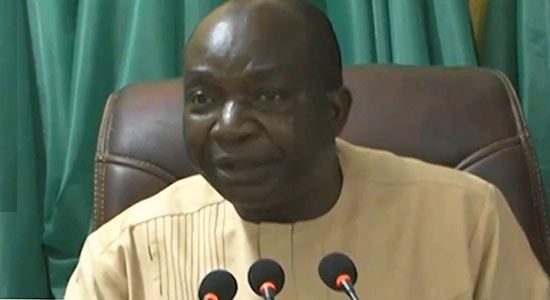 The leadership of the Academic Staff Union of Universities (ASUU) has threatened to resume the suspended strike action following what it described as unfaithfulness of the Federal Government in the implementation of the terms of the agreement in the Memorandum of Action (MoA) signed by both parties upon which the last strike action was suspended.

The Union has therefore issued a 21-day ultimatum for the Federal Government to implement the MoA, failure which the lecturers would return to trenches.

ASUU President, Professor Emmanuel Osodeke, gave the ultimatum on Monday in Abuja while briefing newsmen on the outcome of the National Executive Council meeting of ASUU held between Saturday, November 13 to 14, 2021.

He warned that the National Executive Council of ASUU would meet on the expiration of the 21-day ultimatum to give necessary directive to its members to resume the strike he said was “patriotically suspended on December 23, 2021.”

He also clarified that the Federal Government was yet to release to the universities the N22.127 billion claimed to have been approved for the Earned Academic Allowance (EEA), while the N30 billion released as revitalisation fund for public universities purported to be kept in a dedicated account at the Central Bank of Nigeria (CBN) was yet to be disbursed.

He also spoke on the parlours security situation in the country, the worsening conditions of living and working in the Nigerian University System (NUS) and the nation at large the controversial professorship appointment of Dr Isa Ali Ibrahim (Pantami) at the Federal University of Technology, Owerri (FUTO); among others.

He lamented the inconsistencies in the payment of salaries of ASUU members through the Integrated Personnel and Payroll Information System (IPPIS), urging the Federal Government to fast-track the process of Universities Transparency and Accountability Solution (UTAS), developed by ASUU as a replacement to IPPIS.

Osodeke, also condemned the proliferation of universities in the country, especially by the state governments when the existing ones were not properly funded.

He lamented that despite its meeting with the Hon Minister of Labour and Employment, Dr Chris Ngige, on October 14, 2021, on the major outstanding issues including funding for revitalisation of public universities, earned academic allowances, University Transparency Accountability Solution (UTAS) promotion arrears, renegotiation of 2009 ASUU-FGN agreement, and the inconsistencies in IPPIS payment, the issues are still lingering.

ASUU President said: “In another few weeks, it would be one year since our union patriotically suspended the nine-month strike action occasioned by the failure of the Federal Government to implement the 2009 Agreement and several Memoranda of Understanding (MOU) and MOA that it entered into with ASUU. At the meeting of our Union with the Honourable Minister of Labour and Employment, Dr Chris Ngige, on Thursday, October 14, 2021,
major outstanding issues between ASUU and the Federal Government were raised, discussed and decisions were reached as follows:

“The N30bn revitalisation fund for public universities purported to be kept in a dedicated account at the Central Bank of Nigeria (CBN) was yet to be disbursed even when the majority of Vice-Chancellors had successfully defended their proposals as a condition precedent to accessing the fund.

“The proposal defence exercise which took place from October 2021, was followed by the transmission of the report to the Minister of Finance for the release of allocated funds to the successful universities. On the strength of this, representatives of the Federal Government gave assurance that the qualified universities would get the funds on or before the end of October 4 to 8, 2021. Surprisingly, as of today, November 15, 2021, government is yet to fulfil its promise, with no cogent reason made available to our union.

“Earned Academic Allowances: At the meeting, the Executive Secretary (ES) of the National Universities Commission (NUC) informed ASUU that N22.127bn had been appropriated in the 2021 budget as Earned Academic Allowance
(EEA) based on a weighted average of annual salary appropriated for each university. It was then agreed that the Ministry of Education would take one week while the Ministry of Finance would take up to the end of October 2021 within which payment would be effected. As of today, nothing has been done to implement this agreement,” he said.

Osodeke said: “ASUU is fully committed to upholding academic integrity in our universities and working to make them more globally competitive. We are equally committed to promoting industrial harmony in the Nigerian University System for as long as all stakeholders are willing and committed to play their parts.

“We call on all Vice-Chancellors, as the main drivers of the system, to join us in this mission to safeguard the waning image of our universities. They have no business trading honorary degrees and academic positions for personal and immediate gains; thereby smearing the collective integrity of committed scholars and other patriots who are working day and night to uplift the system that produced them.

“Finally, we call on all patriotic Nigerians and lovers of Nigeria to prevail on the federal and state governments to act fast to prevent another round of industrial crisis in Nigeria’s
public universities.

“It is painful that our Union may soon have no other way of securing the implementation of FGN-ASUU collectively bargained agreements and redressing the criminal neglect of welfare issues of our members by State Governors. Governments of Nigerian should be held responsible should ASUU be forced to activate the strike it patriotically suspended.”

Meanwhile, ASUU President kicked against the appointment of the Minister of Communication and Digital Economy, Dr Isa Ali Pantami as a Professor of Cyber Security by the Federal University of Technology, Owerri (FUTO), saying it was ridiculous that a serving Minister would seek to take up a tenured appointment in the university.

Recall that the ASUU chapter of FUTO recently said standard processes were followed in the appointment of Pantami as Professor of Cybersecurity in the university following an investigation by the panel.

But reacting, to the national union there is something wrong with the appointment of Panatami.

“The controversy this appointment has generated is unprecedented in the recent history of Nigerian universities. Indeed, it has generated passionate comments and responses from individuals and groups within and outside the nation.

“The controversy centres on the perceived roles played by the University administration in the alleged fraudulent appointment, and the subsequent seeming endorsement by the ASUU branch at FUTO. Consequently, some media commentators – print electronic and social have impugned that the national body of ASUU was in agreement with the position of the ASUU FUTO Branch on the said appointment.

“Nothing could be farther from the truth. ASUU, as a Union has never supported, promoted or endorsed any illegal appointment or promotion of academics in any Nigerian University, including those of its members. As a Union, we have always insisted on strict adherence to due process and the rule of law in all aspects of university administration and governance.”

In view of the foregoing, the union rejected the ASUU-FUTO Committee’s report and set up an independent committee to investigate all issues surrounding the controversial appointment of Dr Isa Ali Ibrahim (Pantami) as a Professor of Cyber Security in the University.

He added, “Thereafter, the position of ASUU-NEC shall be made known to the public. In addition, another committee shall visit the ASUU-FUTO branch with a view to determining the role of members in the controversial appointment and report back to NEC for further action,” the ASUU president added.

The union further lamented the state of insecurity, especially in the educational institutions which is gradually becoming a norm, saying the security architecture in the country has almost collapsed.

It said, “There is need for government to ensure porous borders around the northwest and northeast to mitigate the spread of terrorists and bandits from neighbouring countries, and increase political will and determination to end insecurity to disprove the popular cliche that ‘if I security lasts for more than 24 hours, the government has a hand in it.”

On Nigeria’s rising debt profile, ASUU President frowned at what he described as reckless borrowing by the current administration of President Muhammadu Buhari, saying the Debt Management Office, had revealed that Nigeria’s public debt stands at N33.107 trillion/$87.239 billion.

“As it stands, the productive capacity of the real sector of the economy is at its lowest. No country can develop when it borrows from domestic and the international community to fund its annual budget.