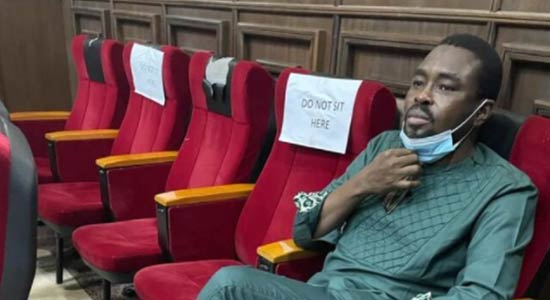 Olanrewaju Suraju, HEDA Resource Centre chairman, will now be arraigned before a federal high court in Abuja on January 24, 2022 for charges relating to forgery.

In a suit marked FHC/ABJ/CR/370/21, Suraju is being charged with cyber stalking for allegedly circulating the fake audio of a phone interview said to have been planted to implicate Mohammed Bello Adoke, former attorney-general of the federation (AGF), in the OPL 245 saga.

Although his arraignment was initially scheduled for Tuesday, the court did not sit.

But Suraju was present in court for his arraignment.

The prosecution counsel was not in court.

After a phone conversation, parties in the suit agreed on a date for arraignment.

Suraju is being accused of circulating a forged email purportedly sent to one Bayo Osolake of JP Morgan, UK, by Adoke from the account of AA Properties, owned by Abubakar Aliyu who was accused of distributing bribes in the transaction.

In February 2021, Adoke, through his lawyers, had petitioned the IGP requesting an investigation into the email shared with the media by HEDA Resource Centre.

He said the email was intended to support the claim that there was corruption in the deal, and to create the impression that he and Aliyu, owner of AA Properties, “worked together” to fleece Nigeria.

The former AGF said he was no longer minister as of the date it was sent and had no reason to use another person’s email address.

Adoke also debunked the claim he had a phone conversation with an Italian journalist in 2017 in which he was said to have acknowledged that the OPL 245 deal was a scam.

He said the phone conversation was state-managed as he was on self-exile at the time and had stopped using a Nigerian line since June 2015.

Shell, Eni and others were eventually discharged and acquitted by the Italian court on charges of corruption in the OPL 245 deal.

The Italian prosecutors are now facing investigation over allegations of manipulating evidence to secure conviction by unlawful means.