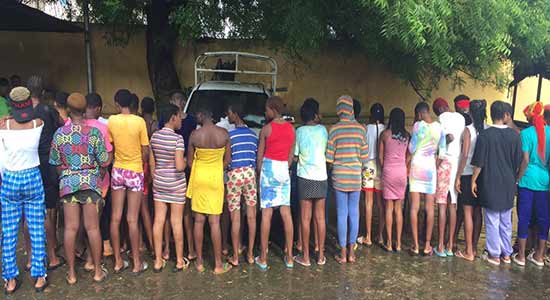 The Anambra State Police Command has busted the hotel camp where teenage girls are used as sex slaves.

About 35 teenage girls used for commercial sex slavery have been rescued with about five of them pregnant.

The girls were kept in the hotel at Umusiome, Nkpor, Idemili North local government area, where they were used to engage in commercial sex and the money paid to their “madam”, who is currently on the run.

Also arrested during the raid were seven other female accomplices including a 35 year old lady who serves as their Madam and assistant manager and two security guards with three pump action guns and seven cartridges.

Parading the suspects and the victims at the Area Command Headquarters, Onitsha yesterday , Police Public Relations Officer of the state Command, Ikenga Tochi said that the Police led by the Onitsha Area Commander, John Obuagbaka following an intelligence gathering on 13th June 2022 stormed the premises of Gally Gally Hotel, Umusiome Nkpor, Anambra State on the where several young girls between the ages of 14 to 17 were used as sex toys by the hotel management who collect money on their behalf and allow men to sleep with them for a fee.

He said preliminary investigation revealed that most of the under aged girls brought from different parts of the country were lured into prostitution in the hotel on the pretext that they are employed as sales girls and waiters at the hotel.

He disclosed that four of the girls were already pregnant at the time of the raid where some others who got pregnant before now could not account for their babies.

He said police has involved the National Agency for Prohibition of Trafficking in Persons (NAPTIP) whom the under aged girls will be handed over for further actions and rehabilitation.

Describing the scene at the hotel as a coordinated crime, the PPRO said some of the matured ladies arrested including those who escaped are responsible for receiving the girls into the brothel , collect money from them after servicing their male patrons and also in concert with the vigilante operatives working there, prevent the ladies from escaping from the facility.

He also disclosed that a cash sum of N877,500 was recovered from the scene of crime while the owner of the hotel is at large even as the police has spread its dragnet to apprehend him.

He said the Commissioner of Police, CP Echeng Echeng has ordered a full scale investigation over the matter and also counselled parents and guardians to take serious care of children under their care so as to prevent the spiralling effect of crime in the larger society.