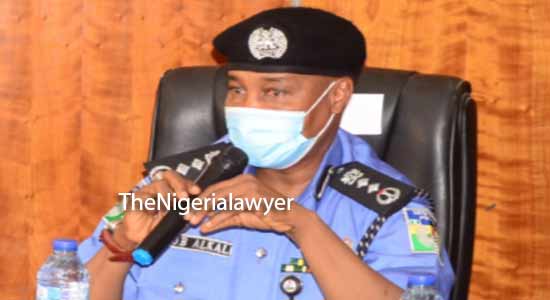 Ahead of the November 6 governorship election in Anambra State, the Inspector-General of Police (IGP), Mr Usman Alkali Baba, yesterday, ordered commanders of the Police Mobile Force (MOPOL) to deal ruthlessly with violent elements and political thugs, who might work against a transparent and credible election in the state.

Baba read the riot act to the squadron commanders and vowed to deal with any commander found to be lacking capacity or will to key into his reform agenda. He expressed worry over reports of misconducts by some police personnel in the country.

But speaking on the Anambra election, Delta State Governor, Dr. Ifeanyi Okowa, said the time had come for the Peoples Democratic Party (PDP) to add the South-east state to the list of states controlled by the main opposition party by winning the November 6 election, the same way it took Edo State in 2020.

Baba, who spoke at a meeting with MOPOL Squadron Commanders in Abuja, said the election security action plan would revolve around police mobile units.

He stated, “As you are aware, the Anambra State gubernatorial election will hold on 6th of November, 2021. The election security action plan will, as usual, revolve around units of the Mobile Police Force.

“The import of this is that the task of securing our democratic values and guaranteeing a safe, secure and credible electoral process in Anambra State will rest squarely and majorly on some of you, the squadron commanders here seated and some of your units.

“Most of your operatives will be deployed to deter subversive elements that are planning to threaten the process, while others will be deployed to secure personnel and materials of the Independent National Electoral Commission (INEC) as well as other critical national infrastructure.

“You must remain apolitical while being ruthless with violent elements and ill-guided political thugs that may wish to test our common will to deliver a transparent and credible electoral outcome.”

The IGP vowed to deal with errant commanders following reports of unprofessional conduct and illegal deployment of personnel.

He told the MOPOL commanders, “Much as I am determined to motivate you to advance your mandate as the striking arm of the force, let no one of you be in doubt about my resolve to deal decisively with any squadron commander that lacks command capacity as well as those who are unwilling to key into our mission of reforming the PMF and repositioning the force.

“Discipline, professionalism and operational excellence are the bedrocks of the PMF. Any personnel that is deficient in any of these has no justification to remain within PMF system, as they are not only dangers to the force but to the nation.

“Accordingly, we shall not spare any PMF operative that continues to conduct himself or herself in manners that are not edifying of the Nigerian Police Force.

“Consequently, the AIG PMF has been directed to put machinery in motion to identify and rationalise such incorrigible elements out of the PMF.”

“Citizens of this country are worried about the illegalities of some bad eggs within the fold of PMF as well as the tendency for corruption by some others. These misconducts are direct consequences of supervisory ineptitude by some of you, the squadron commanders.”

Okowa, who hosted the PDP governorship candidate in Anambra State, Mr Valentine Ozigbo, at Government House, Asaba, said there was ample evidence that the party had prepared well to win the election, which is barely three weeks away. The governor welcomed the decision by the National Assembly to endorse electronic voting by supporting the plan by INEC to transmit election results electronically during the 2023 general election, saying it is a good omen for the country’s democracy.

The Delta State governor, who is also Deputy Chairman of PDP’s National Campaign Council for the Anambra election, described Ozigbo as “humble and dynamic”, saying he towers above all other candidates in the election. He urged the people of Anambra State to give the party their votes at the election, assuring that the PDP would turn things around for the better in the state.

Okowa said he was particularly happy that the party in Anambra State was now more closely knit in the countdown to the crucial election.

He stated, “I welcome you and your entourage to Delta State and to my office; and, I feel very happy within me, because I can see that we have decided to toe the path of unity. When we are united, I am convinced we will come out victorious in the November 6 governorship election.

“I want to congratulate you ahead of time, because I know that you are doing well. There is no doubt that Anambra State has always been a PDP state but, unfortunately, in the past 16 years, we have lost out in the politics of Anambra solely because of the in-fighting.

“But from what I am hearing and what I can see now, I feel very encouraged that there is a new spirit now in the PDP in Anambra. When people resolve that enough is enough, that they have to do the right thing, you find that the result will truly come because the men, the women and the youths are out there.

“I know that there is a lot of security challenges but that shouldn’t deter us because politicians are strong-willed people. The real politics is not the gathering of people on the field but the door-to-door campaign, which is set out to convince people.”

Okowa said the people of Anambra had “seen the other side of the coin at the moment; they are waiting for the PDP and it is for us to rediscover ourselves or to decide to give away this chance, but I’m convinced that you will not allow that to happen.”

He said PDP had a good opportunity to take over Anambra State, just like Edo State. “We may not have a better chance than now, so, we must take it back,” h said.

According to Okowa, “We are reordering not just Anambra but the entire nation, because we have seen too much pain in the last few years and there has been a lot of retrogression and pain caused people. I believe that PDP is in the best position to turn things around, both in Anambra State and nationally.

“There are so many people seeking the office of governor in Anambra and I have had cause to relate with some of them but I believe our candidate is better than all of them out there. To the APGA Youth Leader that is joining us, we welcome you and we are truly very grateful that you have decided to join this train.

“Being a leader of youths, this move is very important for us because I know that the youths have a lot of role to play in elections. I also welcome the women here because women make a lot of mark in terms of numbers on the voting day.”

The governor said he believed the Anambra election would be free, fair and credible election “because I know that INEC is fully ready and the device they want to use has been tested in the Delta bye-election and it was very credible.”

Earlier, Ozigbo said he was in Delta State to present the defecting members of APGA to the governor, who is a national leader of the party. He said the people of Anambra State were waiting for PDP to take over.

In company with Ozigbo were some defectors from All Progressives Grand Alliance (APGA) in Anambra State, led by the former youth leader in the state, Mr Magnus Eziokwu.

“Our team has what it takes to deliver Anambra to PDP and we will surely make our people proud.”

Meanwhile, Okowa described as a welcome development and a victory for democracy the U-turn by the federal legislature on the mode of transmission results of future elections in the country. He said the passage of the Electoral Act Amendment Bill 2021 by the National Assembly, which empowers INEC to transmit election results electronically, would greatly enhance the electoral process and the credibility of elections.

Speaking through his Chief Press Secretary, Mr Olisa Ifeajika, in Asaba, Okowa commended the senate for listening to the loud voices of Nigerians by reversing itself and voting to include electronic transmission of results in the amendment of the electoral law.

While noting that transmitting election results would greatly eliminate electoral fraud, Okowa said, “Laws are made for the people, not for personal interests, and as such, we must always act in the interest of the public.

“Part of the challenges we are facing today as a nation stems from lack of faith in the electoral process, which has huge implications for socio-economic activity in the country, including foreign direct investments.

“Once we are able to get the people to have faith in our electoral process, where the people can truly decide, who leads them, part of our problem would have been solved.”

The governor commended INEC for taking bold steps improve election in the country, saying, “Notable improvement in the electoral process, especially, the recent introduction of the Bimodal Voter Accreditation System (BVAS), will guarantee the credibility of voter accreditation by preventing the incidents of multiple voting or the use of stolen PVCs to vote.”