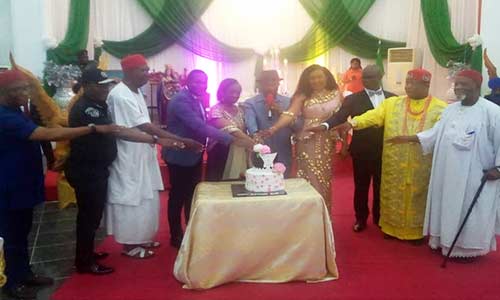 As part of activities to mark the retirement of Anambra State Chief Judge, Justice Ijem Onwuamaegbu, Anambra State government has laid foundation Stone for a high court and Judges quarters building at Aguleri.

Governor Willie Obiano, accompanied by his wife, Dr Ebelechukwu Obiano, performed the ceremony withnesed by Justice Onwuamaegbu, as well as top government functionaries and other notable dignitaries in the State and beyond.

Similarly, Anambra State government also performed the foundation Stone laying ceremony of Ogbunike Court Building. A function performed by the Governor, accompanied by his wife, as well as the Traditional ruler of Ogbunike, Igwe John Umenyiora.

While paying glowing tributes to Justice Onwuamaegbu, Governor Obiano who assured that the projects will be delivered in record time, said that she is one who has proven her mettle in her chosen profession, noting that the Court Complex would take justice to the grassroot and stressed that establishment of high Court is an important aspect of justice delivery.

Governor Obiano noted that the out going Chief Judge brought increased mutual cooperation between the Executive and the Judiciary.

An evening of tributes was later hosted in honour of Justice Onwuamaegbu at the Governor’s Country home in Aguleri.

The Chief hostess and wife of the Governor, Dr Ebelechukwu Obiano described Justice Onwuamaegbu as an unassuming woman that achieved alot in her short stay as the Chief Judge of the Stat Judges also took turns to eulogize her qualities

Responding, Justice Onwuamaegbu who was full of gratitude to the State government, asked the Governor to extend the same hand of fellowship to her successor.

Speaking to the ABS, the member representing Njikoka One Constituency in the State Assembly, Dr. Pete Ibida, and the Executive Chairman of the State Physical Planning Board, Barrister Maduekwe, said that the three arms of government in the State have an existing functional relationship, expressing optimism that it will be sustained .

Justice Onwuamaegbu was called to bar fourty two years ago.