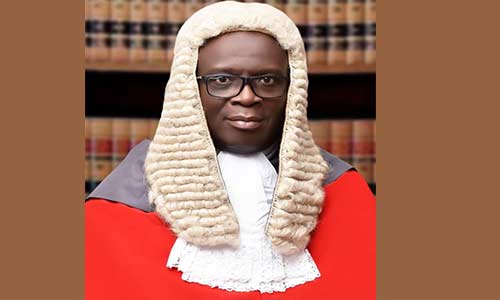 The Anambra State Chief Judge, Hon. Justice Onochie Anyachebelu, yesterday, at the Onitsha Correctional Facility, released ten inmates who were in waiting trial at the centre.

Those granted pardon were nine males and one female inmates among them was one Ifeanyi Egwuatu, a mentally sick inmate, who was brought to the correctional facility over alleged murder; and had been there for nine years without being taken to court.

The Judge subsequently struck out his case, released him, and directed the Controller of Correctional centre to hand him over to his people.

Another was an aged inmate, Johnson Ojukwu Okolo, from Anaku in Ayamelum LGA of the state, who was detained in the facility for eight years over alleged manslaughter. From court records, he was granted bail in 2020, but was not released; and had not been going to court.

Also Okechukwu Okeke from Awkuzu in Oyi LGA of the state, who was awaiting trial since 2014 over alleged attempted murder, his case suffered many adjournments because he reportedly had no lawyer. It was found that the last time he appeared in court was in 2018, when a witness appeared against him, after which he was left to his own fate.

Also discharged was one Uwadiegwu Edeh from Enugu State, who was awaiting trial since 2016, over alleged dangerous driving. Since then, the prosecutor abandoned the case. The Chief Judge subsequently released him, and charged him to be of good behaviour.

Francis Oluchukwu from Imo State, who was reportedly granted bail by a court in 2020, but was neither released nor taken to court for further prosecution, was also released by the Chief Judge for what he described as lack of diligent prosecution.

Also discharged were Ebuka Molokwu, a mentally sick inmate; Arinze Nwoke from Ebonyi State, who was charged with stealing, but was left in the correctional facility without diligent trial; as well as one Mmesoma Okafor, a house wife, who was held since February 14, 2022, for allegedly masterminding the death of her maid.

Speaking after the event, the Chief Judge said that the exercise is part of his constitutional duties, which he said, is in line with the Prison Act, and the Criminal Justice Act; adding that the process is a fast way of decongesting correctional facilities.

He urged all that benefited from the pardon not to go back to their evil ways.

According to him, those released were inmates whose detention were manifestly unlawful; those detained for a period longer than the maximum period of imprisonment which the person detained could have served had he been convicted of the offense of which he was detained; as we as old and very sick inmates.

The Deputy Controller of Corrections in the Onitsha Correctional Center, Mr. Nwosu Val, commended the Chief Judge, and said that the CJ’s gesture would help decongest the facility, and bring sanity.

He urged the police and the judiciary to devise mechanism aimed at quickening dispensation of justice, especially as it concerns awaiting trial inmates, so that the faculty will not be unnecessarily congested.