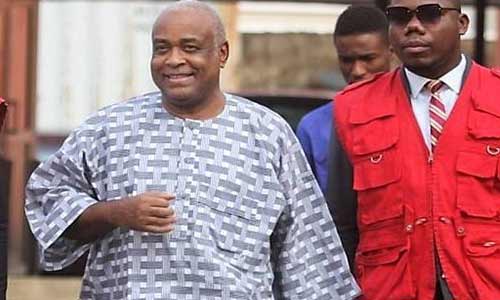 The unavailability of documents from the Corporate Affairs Commission (CAC) has stalled the forgery trial of John Abebe, the younger brother of former first lady, late Mrs Stella Obasanjo on Friday in an Ikeja Special Offences Court.

Abebe is alleged by the Economic and Financial Crimes Commission (EFCC) to have on June 22, 2010 knowingly forged portions of a letter belonging to BP Exploration Nigeria Ltd dated Nov. 30,1995.

The News Agency of Nigeria (NAN) reports that Mr Christopher Ikem, a staff of CAC and the second defence witness (DW2), informed the court that the CAC was still in the process of collating the documents necessary for Abebe’s defence.

He noted that some of the documents date as far back as 1992.

Mr Uche Nwokedi, SAN, the defence counsel, requested for an adjournment of the suit to enable the subpoenaed CAC official bring the necessary documents to court.

Reacting, Mr Rotimi Oyedepo, the lead prosecuting counsel for the EFCC, however, expressed displeasure over the defence counsel’s request for an adjournment.

“My lord the learned SAN can tender the documents himself we should not use DW2 as a skyscraper of adjournments. The documents about to be tendered has no relation to the charge.

“It is alleged that the defendant forged a document that was presented during proceedings at the Federal High Court.

“I humbly and passionately pray my lord that proceedings should not be stalled as justice is not for the defendant alone,” Oyedepo said.

Responding Nwokedi said “We issued these subpoenas to the witnesses in May and this case is under constant review and we owe it to provide the best defence.

“If my learned friend can state here that he has not sought an adjournment in this case, I will let it be. We were meant to take two witnesses today but unfortunately, the second witness is not well,”

Obliging Nwokedi’s request, Justice Mojisola Dada adjourned the case until July 10 and 11 for continuation of trial.

In a no-case submission which relied on Section 239(1) of the Administration of Criminal Justice Law 2011 Nwokedi (SAN) had urged the court to dismiss the EFCC’s case against Abebe.

In the no-case submission which was dismissed by Justice Dada on March, 24 Nwokedi noted that the procurement of the allegedly forged letter by the prosecution was illegal.

He said it contravenes the provisions of Sections 37 and 38 of the National Archives Act and as a result, the document (letter) was legally inadmissible to prove the charge against Abebe.

He noted that the document, which was prepared by BP Exploration Nigeria Ltd and Inducon Nigeria Ltd (both Nigerian companies) were produced from a privately managed archive in London known as Iron Mountain.

Reiterating the claim of the defence, Ovesuor stated in her evidence that by virtue provisions of Sections 37 and 38 of the National Archives Act, it was an offence for a Nigerian company to take its records outside Nigeria.

Abebe had on July 26, 2018 plead not guilty to a four-count charge of forgery, fabricating evidence, using fabricated evidence and attempt to pervert the cause of justice.

According to the EFCC, the defendant committed the offence on June 22, 2010 in Lagos.

“He committed the forgery by inserting in page two of the said letter the following words: “Also note that the ‘Buy-

Out Option’ only applies to the pre-production stage of the Net Profit Interest Agreement
(NPIA).

”The four million dollars buy-out is thus irrelevant from production of oil in any of our fields.

“He purported same to have been issued by BP Exploration Nigeria Limited,” Oyedepo said.

The prosecution claims that the defendant used the allegedly forged letter as evidence in suit No.

The evidence was admitted and marked exhibit BB in the suit.

According to the EFCC, the defendant had through his actions, attempted to pervert the course of justice.