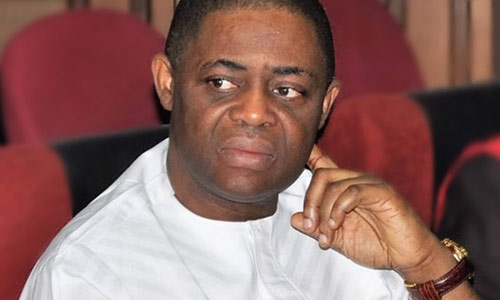 A former Aviation Minister, Femi Fani-Kayode was on Tuesday, re-invited by the Economic and Financial Crimes Commission,(EFCC) following investigations into alleged document falsification.

EFCC charged Fani-Kayode alongside a former Minister of State for Finance, Nenandi Usman.

Also charged is Yusuf Danjuma, a former Chairman of the Association of Local Governments of Nigeria (ALGON) and a company, Jointrust Dimensions Nigeria Ltd.

The Anti-graft Agency preferred a 17-count charge of N4.6billion money laundering against them before Justice Mohammed Aikawa.

They had each pleaded not guilty to the charges and were granted bails.

The trial had begun before Justice Aikawa and witnesses were still being led in evidence, until Aikawa was transferred out of the Lagos division.

The charge was consequently, assigned to a new judge, Justice Daniel Osaigor, and the defendants were scheduled for re-arraignment on Oct. 13.

But on the said adjourned date, Fani Kayode was absent from court and defence counsel who appeared on his behalf on the said day, Mr Fred Ajudua had told the court that he was on admission at Kubwa General hospital in Abuja.

But, the EFCC prosecutor who appeared on that day, Mrs Bilikisu Buhari, informed the court that same tactics had always been adopted by the defendant whenever he does not want to attend court.

After going through the court’s records, Justice Osiagor noted that it was clear that the defendant had issued a similar letter of excuse five times

The court had consequently ordered the defendant to be present in court on the next date without fail.

On Tuesday, when the case was mentioned, all defendants were present in court.

The prosecutor, Mr Rotimi Oyedepo did not oppose the letter of first defence counsel.

Oyedepo however, informed the court that the prosecution was glad that the court had figured out from its record that the second defendant (Fani Kayode) had sought repeated excuses from the court.

He told the court that the prosecution had recently discovered that all letters sent by Fani-Kayode were fake.

At this point, the court stopped the prosecutor on the grounds that it was a matter the agency ought to thrash out before the court acted on the letters to grant an adjournment.

Osiagor said that having granted an adjournement on the letters, the court had become functus officio.

In response, Oyedepo told the court that the agency was currently working on the report and will do the needful

A drama however unfolded after the case was adjourned until Jan. 24 and the defendants stepped out of court.

While Fani-Kayode was still at the corridor of the court an EFCC investigator, Mr Shehu Shuaibu walked up to him alongside the prosecutor and after some tete-a-tete, the defendant entered his vehicle and followed the Efcc operatives to their office.

The operative who confirmed the arrest to journalists, said that at the time of filing this report, Fani-Kayode was in their custody on quiz over the false documents.

In the charge, the defendants were alleged to have committed the offences between January and March 2015.

In counts one to seven, they were alleged to have unlawfully retained over N3.8 billion which they reasonably ought to have known formed part of the proceeds of an unlawful act of stealing and corruption.

In counts eight to 14, the defendants were alleged to have unlawfully used over N970 million which they reasonably ought to have known formed part of an unlawful act of corruption.

Meanwhile, in counts 15 to17 Fani-Kayode and one Olubode Oke who is said to be at large, were alleged to have made cash payments of about N30 million, in excess of the amount allowed by law, without going through a financial institution.

Besides, Fani-Kayode was alleged to have made payments to one Paste Poster Co (PPC) of No 125 Lewis St., Lagos, in excess of amounts allowed by law.juui