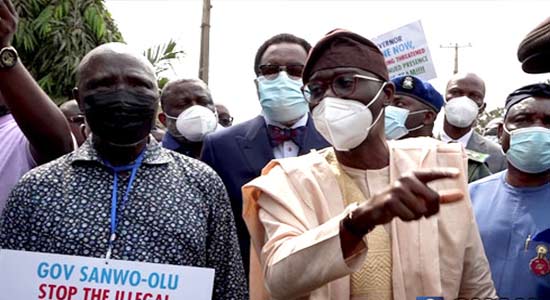 It is no news to everyday internet users that on the 4th of January 2022 a Chief Superintendent of Police (CSP) who oversees a police siege in Magodo, Lagos State openly defies the order of the Executive Governor of Lagos State (Mr Babajide Sanwo-Olu).

While the news has been flying around as to the conduct of the police officer to publicly defies the order of the Executive Governor of Lagos State and many people demanding that the officer should be sanctioned, this article will explain what the true position of the law is as regards to security issue in the Federal Republic of Nigeria under the Constitution of  Federal Republic of Nigeria 1999 (as amended), whether Governors are actually the Chief Security Officers of their respective States, how  Mr Governor should have handle such matter, and whether the CSP was right not to have disclosed the number of men he has on ground for the operation to the Governor.

HERE IS THE POSITION OF LAW.

The Nigeria Police Force is a federal body created by the Constitution of the Federal Republic of Nigeria 1999 (as amended).

Nigeria Police Force. Section 215(1) established the office of the Inspector General of the

English in vesting the Nigeria Police Force shall be under the command of the InspectorGeneral of Police and contingents of the Nigeria Police Force stationed in a state shall, subject to the authority of the Inspector-General of Police, be under the command of the Commissioner of Police of that state. The above provision is also in line with section 6 of the Police Act 2020. Also, matters as to police is under item 45 of the Exclusive List.

The CSP said to Mr Governor that he has received order from the IGP and the Honourable Attorney General of the Federation to carry out the operation. Obviously, many people saw his conduct as been rude and were all misled as Mr Governor stated that He is the Chief Security Officer of Lagos State (Not True).

SANWO-OLU CLAIMED TO BE THE CHIEF SECURITY OF LAGOS STATE.

Take for instance the creation of the office of the President, the Constitution made it clear that the President shall be the Commander-in-Chief of Armed Forces of Federation. See section 130.

As mentioned above on the provision creating the Nigeria Police Force, the entire Police in the Federation is under the command on the Inspector General of Police as Nigeria still practice Federal Policing system.

As explained above, it is crystal clear that the state Governors are not the Chief Security Officers in their respective States.

HOW SHOULD THE GOVERNOR HAVE HANDLED SUCH SITUATION?

In all honesty Mr Governor conducts from the clip I watched looked like someone who is seeking for unnecessary attention from the public.

He is the Executive Governor of Lagos State for a reason and such office gives him some freedom to call any office in the Federal Republic of Nigeria. In my humble opinion, I believe the Governor could have easily invited the Commissioner of Police and the CSP leading the operation to his office and make a phone call right in their presence to the office of the Inspector General of Police to demand that the operation should be call off. If the Inspector General of Police, then insisted on having his men at Magodo then the Governor can also call the Chief Law Officer of the Federation to demand for the reason behind the operation in his state without his consent and have him talk to the Inspector General of Police, the Governor can even go as far as having the President of the Federal Republic of Nigeria involved in the matter. All this can be done behind the close door without the need for media publicity has the Governor has done in exchanging words with the CSP leading the operation openly in front of pressmen.

IS THE CSP RIGHT NOT TO HAVE DISCLOSED THE NUMBER OF HIS MEN ON GROUND?

The Governor question was in public and in front of the press men which means such information will travel faster and farther thereby endangering the life of his men. Once the people are aware that they can outnumbered the officers on ground who is to tell that they won’t result to self-help to remove the officers from the premises? This may also lead to loss of lives and damage to properties and guess who will be responsible for all the action? Well, you already know the answer will be the CSP leading the operation.

Without having to repeat what I have explained above, I believe it is clearer as to the reason behind the refusal of the CSP to obey the Governors order to evacuate Magodo. As the CSP had claimed that the order was from the office of the IGP and the Attorney General of Federation, only then can call off the operation and not Mr Governor or even the Commissioner of Policer of Lagos State.