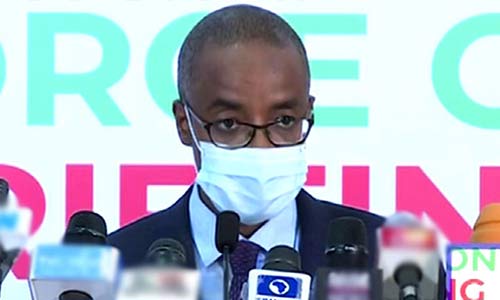 Sani Aliyu, national coordinator of the presidential task force (PTF) on COVID-19, says 80 out of 2,403 tests carried out on international travellers returned positive.

Aliyu, who said this on Tuesday during the PTF briefing, explained the need for the repeat COVID-19 test being conducted on travellers after seven days of arrival in Nigeria.

The PTF coordinator said the patients arrived in the country with a negative PCR test, but that the repeat test would have been unnecessary if the country had “a system of enforcement of isolation such that everybody coming into the country self-isolated effectively for two weeks”.

“Of the 2,403 passengers that were tested in Lagos when we started the exercise, 80 were positive. Meanwhile, they had negative COVID-19 PCR test,” Aliyu said.

He also asked international travellers to pay only to laboratories on the travel portal of the government for their tests.

“No federal government agency is receiving these funds. The negotiation for the cost is between the state governments and the private labs themselves,” he said.

“The charges range between N35,600 for the Kano portal which we are just about to operationalise to N50,400 for Lagos.”

Recall how Ndubuisi Ekwulonu, a Nigerian who came into the country from Sweden, lamented that he was extorted in Abuja over the COVID-19 test.

Ndubuisi, who narrated his ordeal in tears, said despite paying the sum of N42,750 twice for the test, his name was not found on the list of people who were to be tested.

Olorunnimbe Mamora, the minister of state for health, also said the federal government has developed a test kit — SARS-COV-2 Isothermal Molecular Assay (SIMA) — that enables the rapid testing of COVID-19 within 40 minutes.

The health minister said the new test kit produces results faster than the Reverse Transcription Polymerase Chain Reaction (RT-PCR), which is currently the sole source of testing in the country.