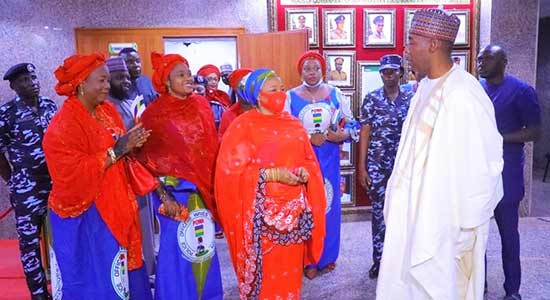 The Borno State Governor, Prof. Babagana Zulum, has ordered the allocation of land to Police Officers Wives Association (POWA) for the establishment of a skills acquisition centre that will train widows and orphans of deceased police personnel.

The governor also ordered the renovation of the Police Primary School in Maiduguri.

Zulum gave the directives on Saturday while receiving the wife of the Inspector General of Police (IG), who is POWA’s President, Hajiya Hajara Usman Alkali, at the Government House in Maiduguri.

The IG’s wife, had during her remarks, informed Governor Zulum about the deplorable condition of the Police Primary School in Maiduguri, seeking the governor’s intervention.

She also requested the allocation of land to POWA for the establishment of a skills acquisition centre through which the association plans to train widows and orphans of policemen.

At an event welcoming Hajara Alkali, POWA president and wife of IGP Usman Baba Alkali, over the weekend in Maiduguri, the chairman Borno State POWA, Zara Yakubu, said that over 260 police officers have been killed in Borno State since the outbreak of the Boko Haram insurgency in the Northeast.

“Their families have, as a result, been exposed to all forms of hazards and vulnerabilities,” POWA said.

“It heartbreaking to note that 265 police officers have paid the supreme price in the counter-insurgency war here in Borno. They lost their lives while protecting the territorial integrity of our great country.

“Their families have been neglected and their children abandoned to their fate. They have been allowed to bear the burden of the sacrifices of their bread winners,” Zara Yakubu noted.

In response, wife of the IGP said she was determined to improve the living conditions of the families of the fallen officers as well as empower others, to serve as motivation for their husbands at the war front.

Zulum, in his response, promptly gave directives for the rehabilitation works that will be carried out after a needs evaluation.

The IG’s wife, who hails from Borno State, commended Zulum for his laudable efforts towards restoration of peace and progressive development to the state.

She said: “Borno is the first northern state we are visiting after Lagos, Rivers, and Ogun States. We are here because of the way you carry everybody along. You are not discriminating against any human being.”

She also commended Zulum’s humanitarian services to internally displaced persons (IDPs) and to families of security personnel that have lost their lives in the line of duty.

Meanwhile, the governor has paid tribute to the Borno State Police Command in respecting the rights of citizens.

He also thanked them for their sacrifices, noting that the police has played and still playing significant roles in Borno’s growing stability and restoration of civil authorities, particularly in local government areas.