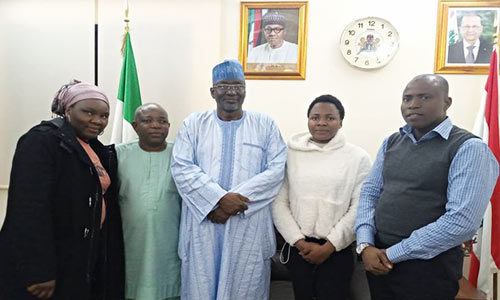 The Federal Government has rescued a 23-year-old teacher, Omolola Ajayi, who was trafficked to Lebanon.

The Nigerians in the Diaspora Commission disclosed on Monday, that Ajayi has been rescued from the home of her captor and is now safely in Beirut with the Nigerian Ambassador to Lebanon.

The NIDCOM spokesman, Abdul-Rahman Balogun said in a WhatsApp message, “Update on the trafficked Nigerian girl to Lebanon. She is now happily in the hands of the Nigerian ambassador in Beirut. She will be home soon.”

In a viral video which circulated on social media last week, Ajayi, a single mother had disclosed her ordeal in the hands of her employer in Lebanon.

Narrating her plight in Yoruba, the Osun State indigene lamented that her boss had made life miserable since she arrived in the country.

She explained that a family friend linked her up with an agent who took her to Lebanon with a promise to get her a teaching job, but instead of being offered a teaching job, her passport was confiscated while her employers allegedly attempted to rape her.

Following investigations into the incident, three suspects were arrested by the Nigeria Security and Civil Defence Corps in Ilorin.

The Chief Press Secretary to Kwara State Governor, Rafiu Ajakaye, said in a statement that two Nigerians and a Lebanese had been arrested in connection with the crime.