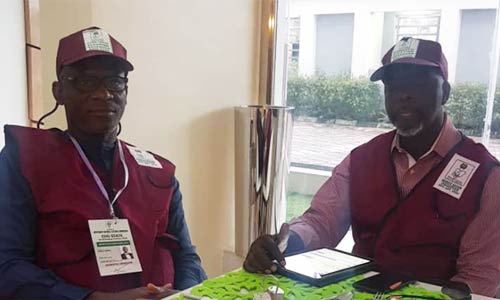 The Nigerian Bar Association has commended the Independent National Electoral Commission(INEC) for free and fair conduct of the Edo State governorship election that was held on Saturday.

This was made known in the interim report submitted to the President of the Association, by the Election Observer group.

TheNigerialawyer(TNL) recalls that the President of the Nigerian Bar Association – Olumide Akpata had appointed a team led by the NBA 1st Vice President – John Aikpokpo-Martins, as members of the NBA Observer Group for the Edo State Gubernatorial election.

The group in their report highlighted all the processes done during the election which commenced with the arrival of election officials, provision of materials, voting pattern, covid19 compliance, demographics of voters, agents of political parties, electorate/voters turnout, card readers, security, and vote-buying/inducement.

Read the interim report below

The Nigerian Bar Association ‘NBA’ is one of the foremost professional bodies in Nigeria that the Independent National Electoral Commission ‘INEC’ partners with for the purpose of its statutory elections. As it is conventional, the NBA President constituted a 12-man supervisory observer group ‘the group’ for this purpose. The group is led by the 1st vice President of the NBA, Mr. John Aikpokpo-Martins. The membership of the group was majorly drawn from different NBA branches in Edo state.

The group converged and met in Benin City on Thursday 17th September 2020. We discussed logistics and coverage plan. The group members took possession of their election materials.

The group was divided into about seven ‘7’ different groups and we agreed that for the purpose of logistics and adequate coverage, other members of the NBA branches in the state should be co-opted to provide onsite reports of electoral incidents to assist us. The group agreed to utilize different social media platforms for the purpose of dissemination of reports.

The group observed from Thursday17th September to the early hours of Saturday 19th September 2020 ‘election day’ that there was heavy presence of security personnel in every nook and cranny of Edo state. The presence of police security and military appear to have calmed nerves of political stakeholders and their agents. There was no incident of violence in the last 48 hours before election day. We heard in the news that the People Democratic Party ‘PDP’ Edo election national coordinator, Governor Wike of Rivers state’s hotel was besieged by security operatives. The group made an attempt to verify this report through visit to the locus, however we were unable to confirm the precise position.

As early as 7:30am, the group set out to different wards and Local Government Areas ‘LGAs’ as agreed. The convergence of opinion generally suggests that voting commenced between 9am and 10am in about 70% of the polling units throughout the state. The electorate converged as early as 8am, however most of the Polling Units officers did not arrive in the stations until about 9am-10am. The accreditation and voting were conducted simultaneously.

From the over 250 polling units aggregately covered by the group, we concluded that arrival time of INEC officials is fair, and we score them 60% in this regard.

As alluded above, voting commenced between 9am and 10am in most of the polling units. The sensitive materials for the elections did not arrive until about this time. We believe, INEC require some improvement around logistics and deployment of ad-hoc staff/election materials.

Our group is of the opinion that provision of materials was adequate in the circumstances of the elections conducted in the different units. We observed that materials were available in over 80% of the Polling units as and when due.

The overall impression of the group in the areas covered suggests that there was a disappointing observance of COVID19 protocols. INEC officials could have done better by organising voters in this instance. We strongly hold the opinion that COVID19 protocols compliance at the just concluded Edo election was abysmal and it is rated 25%. Protocols like washing of hands and social distancing were not observed at all.

The turnout was low. However, it is important to state that the people who turned out were enthusiastic about the process and there was a considerable level of interest in most of the Polling units visited in the state. There was obvious voter apathy.

The older voters from age 40 and above came out to vote, while the youths did not come out.

The female citizens represented about 70% of voters during the election.

The agents of most political parties were generally satisfied with the election. We spoke to several agents and they expressed satisfaction.

In the units covered by the group, the card readers malfunctioned minimally. The device worked well in most polling units and we observed that there is substantial improvement in the deployment of card readers. In one or two units where the card readers broke down, the officials informed us that they had requested for back up card reader.

There was more than adequate security in the state. The polling units had heavy presence of security and we observed that the security personnel were not in the faces of the voters. They did not intimidate the voters.

The only snag we observed is the fact that the Policemen were either not professionally trained about election protocol or they were not informed that observers are part of the election process. We recommend that INEC should improve in this area of enlightenment engagement with security forces.

The group only heard about vote buying and distribution of money to induce voters, however we did not see or encounter any of such incident on the day of election.

The election officials did not interfere with the voters in almost 100% of the units we covered.

The 2020 Edo state governorship election was generally peaceful. We have not been able to confirm any death in any polling unit during the election. Our observation ended at about 4pm on the day of election and we have deliberately excluded the final process of result collation since we did not cover that aspect. In a subsequent report, we shall elaborate on additional recommendations for INEC during future elections.