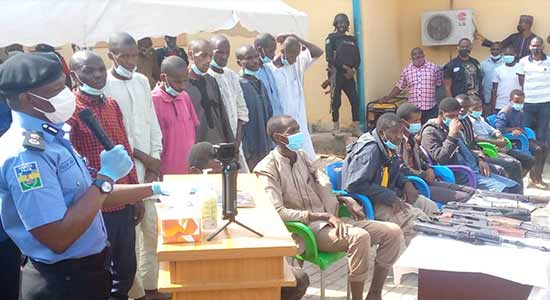 The Nigeria Police on Wednesday, paraded a 20-year old man, Abubakar Amodu, for arranging with a gang to kidnap his father and collect a ransom of N2 million.

Amodu was one of 25 suspects paraded by the Force Public Relations Officer, CP Frank Mba, for various offences in Abuja.

The suspect, who was arrested with other members of the gang, said he worked with his father on the farm rearing cattle.

According to him, his father eventually gave him 15 cows and he left home.

He said he got friendly with members of a gang, who told him that his father was rich, and should be kidnapped for money.

He confessed to arranging with the gang to successfully carry out the abduction and eventually get N200, 000 as his share.

Also paraded was one Abubakar Liyu, a security guard with Ahmadu Bello University, who worked with kidnappers to abduct lecturers and terrorize the university community.

Liyu, who confessed to the crime, said he had organized the kidnap of three lecturers.

One Friday Domozu from Kogi state was arrested for leading a gang that kidnapped and cruelly murdered a five-year-old girl known as Farida Ibrahim in Dekina.

They had demanded a ransom of N8 million from the family who could not afford it. The family had contacted the police and before they could get to the kidnappers, they had killed and buried the little girl in a shallow grave.

The body was dug up by the police and an autopsy showed evidence of violence on the girl. The police said they found another body, buried in a shallow grave by the same gang, and pledged to do everything in their power to bring all the perpetrators to book.

Also paraded was one Umar Jafaru Sulaiman, from Plateau State, who provided prayers for members of his gang, so God will protect them and grant them success in their criminal activities.

Sulaiman, who said he provides spiritual coverage for 15 kidnap gangs, expressed regret for his actions and promised to now be praying for the security operatives to succeed and in their bid to fight criminals.

The police also paraded members of a gang, who killed an Immigration officer and his sister and his wife hostage in June 2020.

Police spokesman, CP Frank Mba, said the Police will not relent in its bid to rid the society of criminals.

He said among items recovered were five AK-47 with magazines and live ammunition, and a cash sum of 765, 000.