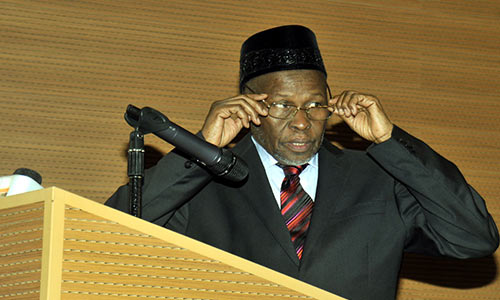 The chief justice of Nigeria (CJN), Ibrahim Muhammad, says 1,144 suspects linked to cases of corruption and fraud have been convicted between January 2 and November 14, 2021.

Muhammad spoke at the third summit on diminishing corruption in the public sector, organised by the Independent Corrupt Practices and Other Related Offences Commission (ICPC).

He said since a committee was set up to handle corruption and financial-related cases, there has been an improvement in the speed of trials.

Muhammad also said the judicial council will not rest until every trace of corruption is “stamped out” of Nigeria.

“Even with the devastating impact of the COVID-19 pandemic in virtually the whole of 2020 and a better part of 2021, a total number of 746 corruption cases were dispensed with. Similarly, the number of forfeited non-cash recoveries made include 51 automobiles, 16 real estates, 11 barge/tug boats and two schools.

“Between 2nd January and 14th November, 2021, a total number of 1,144 suspects were convicted of various corruption and financial-related crimes, while the number of non-cash forfeited assets have also risen to include: eight aircraft, seven filling stations, 48 real estates, 149 vehicles, among others.”

He appreciated the ICPC for their work, but stated that more needs to be done to improve Nigeria’s rating globally.

“The three arms of government, from all indications, are working assiduously to reduce the menace of corruption to the barest minimum,” he said.

“The rating of the country on the corruption perception index by the global anti-corruption agency, Transparency International (TI), though gradually improving, is still not something to cheer about. More work is required and concerted effort needs to be injected to lift us up to the desired pedestal.

“The Nigerian judiciary has been in the forefront in the fight against graft. We have put in place a robust mechanism of introspecting periodically to do a self-assessment to see those areas where corruption could surreptitiously creep into the system and quickly nip it in the bud from the outset.”

He also called for strategy to bridge the gap between the government and the people.

“I make bold to say that within the country, there is a state of mutual distrust between the government (as represented by its various agencies) and the generality of the citizenry,” he said.

“The no-love-lost relationship between the government and the citizens pervades the entire horizon of the country. An average Nigerian citizen does not believe nor has any convincing reason to believe that the instrumentality of governance is designed to benefit him or her by any fraction.

“That is the state we are in, and it will continue that way unless something serious and even drastic is done quickly to bridge the gap of communication and distrust between the ordinary man on the street and the government.”