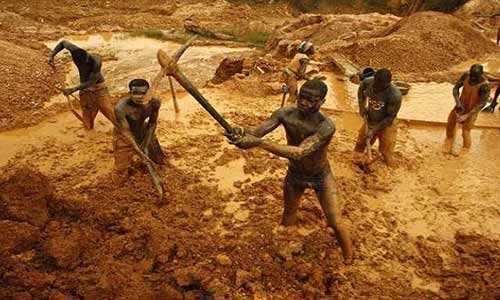 The federal government decision to ban all mining activities in Zamfara state over the violent attacks by bandits will drive away thousands of artisan workers registered under over 300 mining cooperatives into the labour market, Daily Trust findings have revealed.

The Zamfara state commissioner for environment, Alhaji Mukhtar Ahmad Lugga, in an interview with Daily Trust said most of those mining golds in the state are small-scale miners, contrary to insinuations that they are mega companies owned by some prominent individuals.

“Even those with the exploration licence, few of them have obtained the mining lease that gives them the permission to start the mining activities. Before you even start the mining, you have to have a community agreement, that you will build hospitals or schools in the mining community,” he said.

Less than 15% of licenses are operational – Commissioner

Lugga said “I can tell you that you can hardly get 15 to 20 percent out of 100 of those that obtained either exploration licence or mining lease that is into the mining activities. Many of them have held their licences looking for investors. And an investor would not come until he knows what is on the ground. These are the issues concerning mining in Zamfara state.”

He said though the state has fallen into the gold belt in Africa, no one has verifiable reserve estimations of the gold deposit in the state.

The local government areas with gold mines in the state include Anka, Maru, Bukkuyum, Talata Mafara, Maradun and some parts of Gummi.

No official data on Zamfara gold

The President of the Miners Association of Nigeria (MAN) Alhaji Kabiru Muhammed Kankara said it is difficult to know the quantity of gold coming from Zamfara. “You can only know what the genuine people are doing. The other ones will be doing it in secret and will not declare it to the government to generate revenue. And sometimes they do it in collaboration with some so-called foreign miners. They will be smuggling them out of the country.”

Corroborating this, the director of Artisanal and Small-Scale Mining Department, Ministry of Mines and Steel Development, Mr Ojeka O. Patrick said the amount of gold gotten from Zamfara is much but being smuggled out of the country.

“They smuggle them out, so they don’t bring it to us (the ministry), so we don’t know.”

The director said there about 150 mining cooperatives registered in Zamfara alone.

The acting director of the Mines Inspectorate of the Federal Ministry of Mines and Steel Development, Engineer Frank Odoom, said: “I cannot tell you the amount of gold produced now because they are not documented. Their production is not captured officially, but there is a production that is sustainable. The mining there at the exploration stages. They are not actually mining but they are developing their mines little by little. But there is no full-scale mining there now.”

200 of my workers are jobless – Miner

Alhaji Shamsuddeen Sani Dahiru, the managing director Inta General Enterprises, a Gusau-based mining firm, said even though they were backing all moves by the authorities to bring lasting peace, but they are against linking the insecurity to mining activities

However, the chairman of Anka local government Alhaji Mustapha Gado, in whose local government Sunke mining field is found, told Daily Trust that they had earlier written to the state government requesting the authorities to halt mining in the state.

The suspension of mining activities in Zamfara state was temporal and will not be for so long, the Minister of Mines and Steel Development, Abubakar Bawa Bwari, has said.

The minister who was responding to questions by journalists whether the suspension of mining activities in the state will not chase away foreign investors.

“We are not chasing away miners/foreigner investors as we have to consider the welfare of the people. This is why we have to take this difficult decision and we want to plead with our investors that it is a temporary thing and they will resume mining again,” Bwari said.

“The activities of bandits and criminal elements have affected the exploration of mining. If our mining inspectors visit sites, some of the activities there are unfortunate … that is why the government is taking the decision to suspend the mining activities in Zamfara for now.”

According to the president of MAN, the suspension of mining activities in Zamfara state by the Federal Government is a welcome development.

He said though mining happens to be an arm of economic activities in Zamfara state that tend to generate money locally for the people, a lot of people are capitalizing on it to create havoc which is not in the interest of the government.

How to end banditry -KADCCIMMA

The Director General of the Kaduna Chamber of Commerce Industry Mines and Agriculture (KADCCIMA), Malam Usman Saulawa has urged the federal government to involve community leaders in activities at various mining sites across to country with a view to tackling the incessant cases of armed banditry.

Saulawa, in an interview with Daily Trust, said: “the government should look at the whole scenario holistically and involve communities through their community policing programmes to check activities in mining sites across the country by doing so, the government will be attending to the social needs of such communities.”

He urged the federal government to ask already registered mining companies to re-register again and get the communities around the sites involved in the activities.

“Community leaders should form a vigilante for community policing apart from the effort the government will draw up through regulation that will help in attending to the social needs of the localities.

“Because I believe unemployment is one of the causes of people being recruited into such activities, I am sure if they are involved it will reduce the activities of banditry in the area and someone will have control of exactly what is happening,” he said.