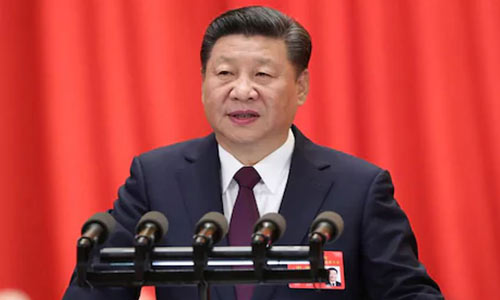 *Internet Rumours Of Xi Jinping Removed In Coup, No Official Word From Beijing

The internet is abuzz with reports saying ‘something is up’ in China, with people’s guesses ranging from a political or military coup against President Xi Jinping to potential military activity in Western China.

The evidence cited for such guesses includes reports of cancelled passenger flights in parts of China, Xi not being seen in public for some time, and footage allegedly of military vehicles moving towards the capital Beijing.

However, there is neither any official comment on these guesses nor any confirmed report on military movement towards the capital.

Here we share what’s being said on social media, particularly in India, and what are the facts that we know for sure.

Is Xi Jinping facing a coup?
Twitter accounts with several thousands followers have shared that there has been a coup against Xi. Photographs of a successor have also appeared. However, none of these updates are from verified or credible accounts and most of these accounts are of anonymous users.

“This video of military vehicles moving to Beijing comes immediately after the grounding of 59 per cent of the flights in the country and the jailings of senior officials. There’s a lot of smoke, which means there is a fire somewhere inside the CCP. China is unstable,” said author Gordon G Chang.

This video of military vehicles moving to #Beijing comes immediately after the grounding of 59% of the flights in the country and the jailings of senior officials. There’s a lot of smoke, which means there is a fire somewhere inside the #CCP. #China is unstable. https://t.co/hSUS3210GR

Defence affairs writer Saurav Jha shared on Twitter that there were no flights over Tibet Autonomous Region of Cihna earlier on Saturday.

“Of direct concern to us here in India. Many Flights to Lhasa Gonggar are also being cancelled. We have to see if there is an uptick in military air traffic over the Tibetan plateau or not,” said Jha, hinting at possible military activity in Western China that borders China, where India and China are engaged in a military stand-off for over two years.

Of direct concern to us here in India. Many Flights to Lhasa Gonggar are also being cancelled. We have to see if there is an uptick in military air traffic over the Tibetan plateau or not. # XiJinping pic.twitter.com/xFvJDL6xhp

What experts have said?
Most of the China experts have highlighted that there are no signs of the coup beyond commentary on social media, particularly in Indian circles.

China expert Aadil Brar noted that Xi is likely in quarantine after returning from the Shanghai Cooperation Organisation (SCO) Summit, which would explain his absence from public affairs at the moment.

Brar also shared flight data showing there is no disruption of flights. He further shared visuals of public briefings by senior Chinese officials, suggesting that government is functioning normally.

No flights are cancelled anywhere. Look at number of flights in and out of China. pic.twitter.com/zohASE623C

Journalist Zakka Jacob higlighted that Xi has a powerful institutional hold over China which makes a coup unlikely.

“Lots of rumours this morning about a military coup in China. Nothing credible so far. Military coups are unlikely in China because the People’s Liberation Army comes under the Central Military Commission. Xi, as General Secretary of the Communist Party heads the CMC. The Army is that of the party, not government,” said Jacob in a tweet.

Journalist and author Ananth Krishnan also said there is no evidence so far of a coup.

“While Chinese politics is the blackest of black boxes, I’ve come across zero evidence in Beijing today to substantiate any of the social media rumours,” said Krishnan on Twitter, noting that the rumours have surfaced in the run up to the crucial Chinese Communist Party in which Xi is expected to secure an unprecedented third term.

The Hong Kong-based South China Morning Post has not reported about any coup or political upheaval in China at all. It has posted dozens of tweets in the last 24 hours about various issues concerning China and the world, but not even a remote hint about the alleged development in Beijing.