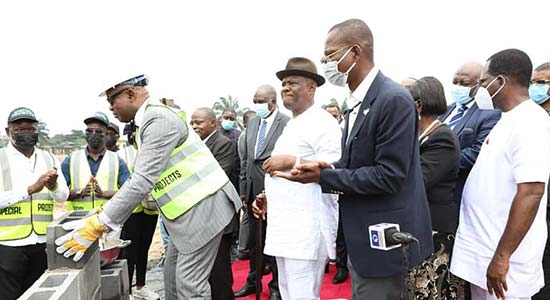 Rivers State Governor Nyesom Wike said his administration was poised to build, furnish and deliver the best campus of the Nigerian Law School in Port Harcourt.

The governor gave the assurance at the ceremony marking the official flag-off of civil engineering works for the establishment of the law campus at Rumueme Town of Obio/Akpor Local Government Area, yesterday.

Governor Wike noted how Rivers people had hailed his idea and eventful decision to request for a campus of the Nigerian Law School to be located in Port Harcourt.

According to Governor Wike, if the Rivers Government had not initiated to flag-off and construction of two hostels and an auditorium at the Yenagoa campus of the Nigerian Law School in Bayelsa State, it would have missed the opportunity to request a Port Harcourt campus.

With the request granted and commencement of construction work at the new Law School site, Governor Wike said Rivers people would be the greatest beneficiaries in terms of employment opportunities the campus will offer and the attendant economic activities within the precinct of the institution.

‘People are saying what a wonderful project; what a wonderful decision that we took. I’m sure every Rivers man and woman, even persons who have a clear heart who is not going to play politics will know that decision of siting Law School campus in Port Harcourt is very key,’ he expressed.

‘Not only will it help to reduce the number of those who ordinarily will not have the opportunity of going to law school at the time they finish their law programme at the university, it will improve the economy of the State. It will also create employment for our people.’

Governor Wike noted the importance of the Yenagoa campus of the Nigerian Law School to the South-South region but observed that even together with the other existing five campuses, there is still the lack of carrying capacity for law students due to such training.

The governor said the Port Harcourt campus would be part of the contribution of the State government to legal education in the country.

He particularly acknowledged the apolitical consideration given to his request by the Attorney General of the Federation and Minister of Justice, Abubakar Malami, a Senior Advocate of Nigeria (SAN), despite his being a major critic of the All Progressives Congress (APC)-led Federal Government. 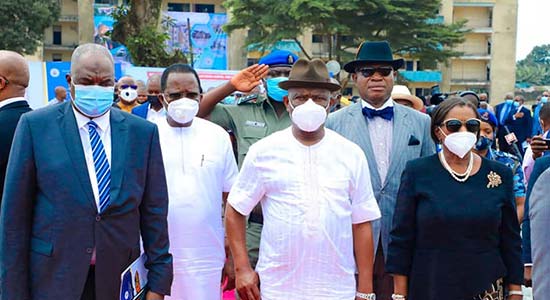 The governor also handed over the certificate of occupancy of the land on which the campus is being built and the land where the staff quarters would be built opposite the Hotel Presidential to the Attorney General of the Federation and Minister of Justice.

Governor Wike also announced that the Rivers State government has approved subvention for the running of the Law School for the next four years.

The state governor further declared that he has the capacity and political will to complete the construction of the Law School on schedule.

Performing the flag-off, the Attorney General of the Federation and Minister of Justice, Malami, who was represented by the Chairman, Council of Legal Education, Chief Nnaemeka Ngige, SAN, recounted how the journey leading to the foundation laying ceremony started with the request made by Governor Wike for a Law School in Port Harcourt.

He asserted that the Council of Legal Education had resolved that henceforth, any State Government or group of persons wishing or offering to build a campus of Nigerian Law School in any other part of the country must comply with what is now called the Rivers’ Model.

‘I, therefore, use this medium to congratulate Governor Wike, the government and the good people of Rivers State for the vision and proactive stance in attracting monumental project to Port Harcourt, Rivers State. It is epoch-making and a landmark achievement, which posterity will rate very highly in the history of Rivers State.’

He explained that following Governor Wike’s request, the Council of Legal Education has accepted to name the Port Harcourt Law School campus after legal luminary and former Attorney General of the Federation and Commissioner for Justice, Justice Nabo Bekinbo Graham-Douglas, SAN.

The Director General of the Nigerian Law School, Professor Isa Huyatu Chiroma, who commended Governor Wike for his zeal to advance legal education, said academic activities are expected to start at the Port Harcourt campus in the next six to eight months.

He further thanked the Attorney General of the Federation and the Council of Legal Education for the approval to site the campus in Rivers State.

Rivers State Attorney General and Commissioner for Justice Professor Zacchaeus Adangor said the Law School campus in Port Harcourt will stand out as one of the most iconic achievements of Governor Wike’s administration.

The President of the Nigerian Bar Association, Olumide Akpata, noted that Governor Wike had made history as Rivers State is the first to officially build a campus of the Law School for the Council of Legal of Education.

Former President, Nigerian Bar Association, Onueze OJ Okocha, SAN, said it was gratifying to have a Law School campus in Port Harcourt which has over the years, remained a centre of excellence in legal practice.