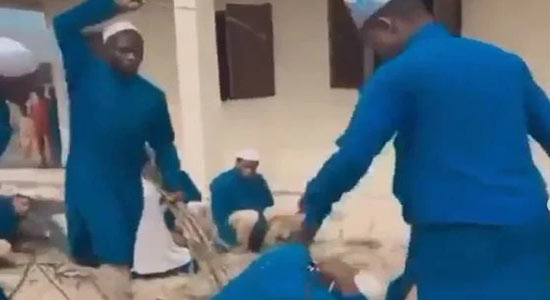 The Kwara State Government has suspended the leader of an Arabic school in the Ganmo area of the state whose students were seen in a viral video being punished for alleged conduct said to be contrary to the rules of the school.

The Commissioner for Education and Human Capital Development in the state, Sa’adatu Modibbo Kawu, made this known in a statement on Sunday.

The viral video showing some students of the Madrasa brutally flogged by their instructors had elicited nationwide outrage over the weekend with many Nigerians condemning the action while calling on the Kwara State Government to investigate it.

One of the students who was brutally flogged, Nasirudeen Muhideen, while being interviewed by an unnamed teacher before the school assembly, had said they all attended a birthday party last Sunday but only one among them drank a bottle of Trophy while the others drank Malta Guinness and energy drinks which are non-alcoholic.

The assembly had been called by the panicky school authorities over the viral video showing the students being flogged brutally.

In a statement, however, the Kwara commissioner said a government delegation visited the Arabic school and took the decision to suspend the headteacher of the Madrasa.

It partly read, “The government’s team carefully listened to the authorities of the Arabic school, the father of the sole girl in the video, and four other students involved in the unsavoury development.

“Regardless of the explanations of the authorities on the development, the self-confessed consent of the parents and regret of the affected students, the government seriously frowns at the harsh beating seen in the footage.

“Consequently, the government has directed the setting up of an investigative committee, comprising Muslim scholars, leaders and government officials, to look into the issue while the head of the Arabic school, who admitted to directing the punishment, has been asked to step aside pending the conclusion of the investigation.

“The government has also taken the affected students to a public hospital for proper medical examination and treatment. This is to ensure that none of them suffers any physical or psychological damage.”

The government appealed to the people of the area to be calm “while the committee does it works and submits a report for further action”.

Meanwhile, the Students of Musbaudeen, a Madrasa (Arabic/Quranic) school in Ilorin, Kwara State who were brutally flogged in a viral video have explained the circumstances that led to the incident.

One of them, Nasirudeen Muhideen, said they were flogged for attending a birthday party last Sunday where they were alleged to have taken alcohol.

He spoke in an interview by an unidentified teacher before the school assembly.

He however said only one of them drank a bottle of Trophy beer while the others drank Malta Guinness and energy drinks, which are non-alcoholic.

The assembly was summoned following the nationwide outrage that greeted the recorded brutal beating of the students.

Muhideen said: “We went for the birthday party of one of our classmates last Sunday and we were many.

“One of us drank alcohol but not all of us drank. When the Imam and some parents saw it, they were angry. It was that anger that made them beat some of us on Wednesday, while others were flogged on Saturday.

“One of us drank Trophy [beer], while all the other drinks on the table were Malta Guinness and energy drinks. So, that is what happened.”

Asked to react to a separate video showing some students dousing one another with alcohol, Muhideen said: “I don’t know about that. At the party we attended on Sunday, nobody was bathed in drinks. Only one among us ordered a bottle of Trophy.”

Another student, Abdulmumin Jibrin, who was among those that was flogged, however, thanked the school authorities for “disciplining” them.

He said that he told his colleagues who were not happy about the flogging not to post the video on social media but they went ahead to do so.

“As they flogged us on Wednesday, we believe we deserved the flogging as a form of discipline. We deserved it, but some of the students that were flogged went to post it on social media and I told them not to.

“The way some of our parents called the Imam to express support is what good parents should do because discipline will ensure that we don’t do that again.”