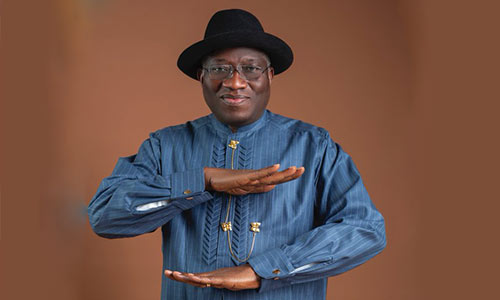 Amid reports of his plan to defect to the All Progressives Congress (APC) from the Peoples Democratic Party (PDP), former President Goodluck Jonathan is only biding his time for some of the conditions he had given the ruling party to be met.

SaharaReporters learnt that apart from that, the APC cabal loyal to President Muhammadu Buhari is indeed keen to bring Jonathan into the party for a number of reasons, including damaging the ambition of the national leader of the party, Bola Tinubu to become Nigeria’s president in 2023.

A top source told SaharaReporters that the Buhari had started courting Jonathan since 2020 to bring him into the APC to run for the presidency and succeed Buhari.

According to the source, the Presidency cabal wants to make Jonathan the next president as they know he won’t investigate atrocities committed by Buhari’s regime.

And Jonathan, who is purportedly nursing a presidential ambition to complete two terms in office, an opportunity denied him by the APC in the 2015 presidential election, has agreed to play the game, especially considering the slim chances he has in the PDP with the wealth and connection of former Vice-President Atiku Abubakar.

Atiku was the PDP presidential candidate in the 2019 election.

Although Atiku has yet to declare interest in the race, he appears to be testing the waters, as some groups showing support for his 2023 ambition have already emerged.

The source further said Jonathan is also wary of the threat posed by the ambitions of the Governors of Sokoto and Rivers states, Aminu Tambuwal and Nyesom Wike respectively, said to be considering a joint ticket.

However, Jonathan was said to have given certain conditions to Buhari’s cabal which have yet to be fully fulfilled hence the delay in joining the ruling party.

“About a year ago Jonathan started consulting with APC to see how he could join the party. Jonathan realised that his chances in PDP were slim due to Atiku’s influence and opposition posed by PDP leadership, including Wike who is interested in a joint ticket with Tambuwal,” the source said.

Noting how the move by the Buhari cabal is also kill another bird, which is the ambition of Tinubu to succeed Buhari in 2023, the source added, “Buhari and his cabal had decided to discard Tinubu and started courting Jonathan. Jonathan assisted APC candidate in his state to win election but a court squashed his victory before he could be sworn in.

The Supreme Court in February 2020 sacked David Lyon of the APC as governor-elect of Bayelsa State, barely 24 hours to his inauguration. Lyon had the support of Jonathan in the election and it paid off as he won the November 16, 2019 governorship election in the state.

But a five-member panel of the apex court led by Justice Mary Odili nullified the election of Mr Lyon on the grounds that his deputy, Biobarakuma Degi-Eremienyo, presented false information to the Independent National Electoral Commission (INEC), which aided his qualification for the last governorship election.

The Supreme Court had agreed with an earlier ruling of the high court on the matter, leading INEC to subsequently withdraw the certificate of return issued to Lyon and Degi-Eremienyo, as they had a joint ticket.

The source continued, “Buhari cabal knew Jonathan could only do one term, in fact only 2 years constitutionally. They also know Jonathan is a softie who won’t go after members of the current regime.

“But Jonathan insisted on one condition that monies and assets of his which were seized and frozen by the Buhari government should be returned including, those belonging to his wife, Patience. He told them he had no money and the cabal agreed that they would unfreeze his assets and bankroll him.

“He has insisted that they must demonstrate good fate before he would take the plunge. And they have started to resolve some of the issues raised by Jonathan. For instance, one of his cousins $40 million was returned via two court rulings.”

Recall that in May 2019, an Abuja Division of the Federal High Court discharged and acquitted Jonathan’s cousin, Robert Azibaola, of $40 million laundering charges filed against him by the Economic and Financial Crimes Commission (EFCC).

The judge, Nnamdi Dimgba held that no credible evidence was adduced to establish the offence of money laundering against Azibaola.

The source, however, said the former President is due in the Gambia on a diplomatic assignment in the coming week and might take the plunge by joining the APC when he returns as there are speculations that his seized assets might have been released by then.

“I think the Jonathan’s people were holding out for the release of monies seized from his fronts. Conversations were around the issue of monies frozen and all. The monies may have been released Buhari and the cabal have backed themselves into a tight corner. But fortunately, Nigeria has moved on from 2015. Jonathan has no base in the South-South.”

Meanwhile, the National Secretary, APC Caretaker, and Extra-ordinary Convention Planning Committee, John Akpanudoedehe, on Wednesday stated that Jonathan can contest the next Presidential election in 2023 if he joins the party.

He said this while featuring as a guest on Channels Television’s Politics Today.

He revealed this when asked about reports saying Jonathan is considering joining the ruling party.

Akpanudoedehe said the ex-president will be given a founding member status if he joins the party that defeated his party, Peoples Democratic Party in 2015 and got him out of office.

The APC official, however, noted that Jonathan would compete with other members of the party before getting the ticket, stressing that he will not get an automatic ticket.

Akpanudoedehe said, “We will welcome him; that will also strengthen the party.

“The last National Executive Council of the party actually gave a blanket approval to any individual that if you join APC today, it is as if you are a founding member of the party.

“So, anyone who joins today has the same opportunity to run for any office in this party. It has always been so, so I am not speculating.”

There have been reports that Jonathan would join the APC but the PDP has insisted that the former President would not be leaving the party.