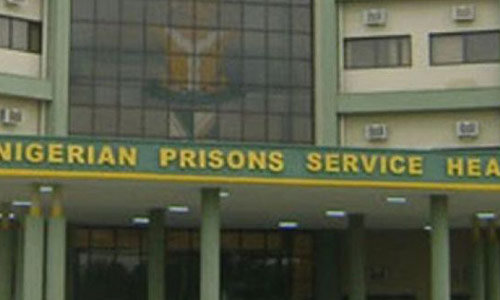 The Nigeria Correctional Service, Ondo State Command, has explained why an #EndSAR protester, Kemisola Oginniyi, who gave birth to a baby in their custody was still remanded.

Recall that Kemisola who has been in prison custody since October 24 last year gave birth to a baby boy on June 16.

She was arrested alongside three others, Ayodele Bukunmi, Ojo Samuel and Ani Obinna at remanded at Surulere prison in Ondo.

They were accused by the security operatives that arrested them of being amongst those who razed the state Secretariat of the All Progressive Congress.

However, the Public Relation Officer/ Legal officer of the command, Ogundare Babatunde in a statement made available to Vanguard in Akure explained that Kemisola was remanded “for conspiracy, arson, riotous assembly, stealing, and malicious damage.

The statement entitled press statement on Kemisola Ogunniyi: The Fact In Issue’ said that “The attention of the Nigerian Correctional Service, Ondo State Command has been drawn to the viral picture of a nursing mother with her newborn baby being spread on social media platforms with malicious intent.

“The lady in question was remanded in the female custodial facility by a court of competent jurisdiction on the 24th November 2020, for conspiracy, arson, riotous assembly, stealing, and malicious damage and the matter was subsequently adjourned to 8th December 2020 for hearing, and further adjourned to 9th March 2021.

“She was 2 months pregnant when she was remanded in the facility and all necessary medical cares and legal attention needed was accorded accordingly within the ambit of the operational orders of the service. Her families and legal representatives were given access to visit her as well.

“She fell into labour on Tuesday 15th June, 2021, and she was immediately moved to the Ondo State Basic Health Centre for delivery and she delivered her baby on the 16th June 2021 around noon.

“She was hale and hearty with the baby and subsequently discharged and was taken back to the facility for further care.

“lt is very expedient for the general public to know that the Nigeria Correctional Service will not unlawfully hold down any inmate without the order of court hence, the need to disregard the viral pictures and deceitful information emanating in the social media in other to discredit the service.

“While assuring the public of the commitment of officers and men of the command to the care and support for Inmates, the State Controller Barr. S D Kinane wishes to state that the service is community friendly and will not act contrary to the operational orders and constitution of the federal republic of Nigeria.

Babatunde said that “The inmate and her baby are hale and hearty in the facility pending the determination of her case before the court of competent jurisdiction.
Meanwhile, Kemisola’s lawyer, Tope Tomekun, in a letter to the Ondo Chief Judge, Oluwatoyin Akeredolu insisted that Kemisola was innocent of the crime preferred against her.

Tomekun said that Kemisola was “on her way to the Federal University of Technology Akure (FUTA) to collect money for her mother’s treatment when she was apprehended by the Nigerian Army on random raiding and handed over to the Police for investigation.

“She was later alleged to be part of those who set APC Secretariat Akure on fire during the ENDSARS protest that took place in October 2020.

“I write to you sir, first as a lawyer and in furtherance of my conviction as a believer in humanitarian cause of justice, to appeal to you sir, that for the sake of the sinless newborn child and in the interest of justice, to give directive that this matter be given an urgent hearing as this is one deserving case sir, in which the powers in this direction could be exercised.”

The lawyer appealed to the state Attorney General and Justice Commissioner, Titiloye Charles to use his powers to discontinue the prosecution of Kemisola and others.

Also, her family members have equally pleaded with the power that be both in the judiciary and state government to temper justice with mercy and set the new mother free.