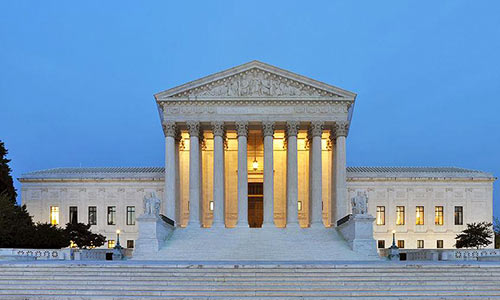 The Supreme Court on Thursday blocked President Biden’s plan to require most workers be vaccinated against Covid-19 or undergo weekly testing.

But the justices, in a separate decision, upheld a smaller and more targeted regulation that will require workers in hospitals and nursing facilities be vaccinated. This rule, once put into effect, is expected to cover about 17 million people working in healthcare, the administration said.

In blocking the broader workplace rule, the court’s conservative majority agreed with Republican state attorneys contended the president had overstepped his authority by requiring workers in companies and agencies with more than 100 employees be vaccinated or tested regularly. There were exemptions for those who worked outdoors or at home, or had medical or religious objections.

The vote was 6-3. Biden’s rule was based on the Occupational Safety Health Act of 1970, which protects employees from toxins and other dangers in the workplace. The justices said it does not go so far as to authorize mandatory vaccinations.

However, Chief Justice John G. Roberts Jr. and Justice Brett M. Kavanaugh joined with the court’s three liberals to uphold Biden’s testing requirement for hospitals and nursing homes. It is based on the Medicare and Medicaid Acts, which authorize federal health officials to set standards to protect the health and safety of elderly and sick patients.

Justices Stephen G. Breyer, Sonia Sotomayor and Elena Kagan said they would have upheld both regulations.

Biden’s vaccine rules were announced in November and were due to take effect in January, but they were put on hold while the legal challenges went forward.

The lower courts had been split.

The Ohio-based 6th Circuit, in a 2-1 decision, cleared the way for the workplace rule to take effect. Judges in Missouri, Louisiana and Texas had blocked the narrower rule that applied to hospitals and nursing facilities.

Lawyers on both sides filed emergency appeals in the Supreme Court asking the justices to decide quickly and issue orders that allowed or blocked the rules from going into effect.