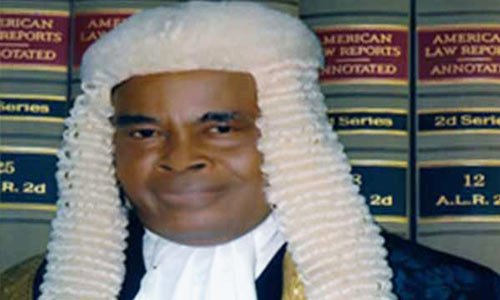 Hon Justice Syĺvester Nwali Ngwuta of the Supreme Court has been reported dead.

Accordingly to the information made available to TheNigerialawyer Justice  Ngwuta died in the early morning of today.

A source informed TNL that he died in his sleep at his official residence in Abuja.

A member of the National Judicial Council (NJC), who does not want his name disclosed confirmed the report.

Justice Ngwuta Was getting set for his retirement from the Supreme Court on 30th March, 2021 upon attainment of 70 years mandatory retirement age.

May his gentle soul rest in perfect peace! Amen

TheNigerialawyer recalls that on the 8th of October, 2016, late Justice Ngwuta residence was raided by Nigeria’s Department of State Services (DSS).

He was charged with 16 counts of corruption and laundering 505 million naira (US$ 1.6 million) via a local company.

During the raid, DSS uncovered a bag allegedly containing 27 million naira in cash and four passports, which he is accused of using interchangeably.

Ngwuta was released on a bail of 100 million naira on Monday.

The Nigerian Bar Association also denounced the raids and accused the DSS of running a “Gestapo-style” operation.

Prosecutors cautioned against bail for Ngwuta, saying he could use his influence as a senior judge to hobble the case against him.

Ngwuta has pleaded not guilty to all charges.

He was suspended from the court during his trial at the Code of Conduct Tribunal and the Federal High Court in Abuja.

The trials were later suspended following a judgement of the Court of Appeal.

After three years of a ‘technical suspension’, from the bench of the Supreme Court, Justice Sylvester Ngwuta has now resumed his duties.

Indication of his resumption emerged on Monday as he joined the members of the Supreme Court’s bench at the special court session marking the commencement of the new 2019/2020 legal year of the apex court.

Ngwuta with some judges whose houses were raided by the operatives of the Department of State Service in August 2016, was asked to step down from the bench pending the conclusion of the criminal trial against him.

The National Judicial Council had said the affected judges were not suspended as they continued to earn their pay for the period but were only barred from judicial functions.

Some of the judges had been recalled.

But Justice Ngwuta and some of the judges were subsequently charged with corruption.

Ngwuta was charged with money laundering before the Federal High Court in Abuja, and with assets declaration breaches before the Code of Conduct Tribunal.

But both cases were dismissed in 2018 following a Court of Appeal’s verdict which prohibited the trial of a serving judge without being first disciplined by the National Judicial Council.

Ngwuta has not been part of any sitting or ceremony of the court from 2016 until Monday, September 23, 2019

Hon. Mr. Justice Nwali Sylvester Ngwuta was born in 1951 in Amofia-Ukawu, Onicha Local government Ebonyi State. His lordship had his basic education in the Eastern part of Nigeria and got his LLB in University of Ife (Now Obafemi Awolowo University). lle-ife in 197- and BL at the Nigerian law school in 1978.

My lord, Hon. Mr. Justice Nwali Sylvester Ngwuta, is an hard working and dedicated public servant, who was a primary school teacher, far back as 1966, he became a clerical officer (Account Ministry of Education in

(Divisional School Board, Afikpo) August 1971). He was deployed as the state counsel in charge, Ministry of justice, Oturkpo, Benue State, during his National Youth Service Programme in August 1978-october 1979. He started his private legal practice at Abakaliki in July 1978-October 1995, from where he was appointed a judge of the High Court Abia state in October 1995 and there promoted to the Court of Appeal on 22nd May, 2003, was finally sworn-in as Justice of the Supreme Court of Nigeria in May 2011.