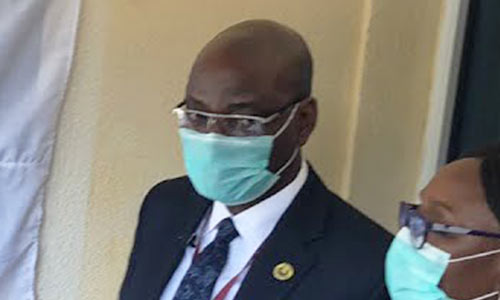 Twenty four hours after the Governing Council of University of Lagos (UNILAG) announced the removal of Prof Oluwatoyin Ogundipe as Vice Chancellor, the Senate of the institution and the four staff unions yesterday rejected the decision, describing it as illegal.

The Senate and the four staff unions passed a vote of confidence on Prof Ogundipe and insisted he remains the vice chancellor as they also distanced themselves from the appointed acting VC, Prof Theophilus Soyombo.

At about 11.46am, Prof Ogundipe and Prof Folashade Ogunsola, deputy VC Development (Services) arrived the venue of the joint congress of the staff unions from Abuja and he was received amidst songs and praises about his administration.

After the emergency congress, the four staff unions staged protest from the Senate Building to the university main gate. They denounced the decision of the governing council to sack Ogundipe without following due process.

Addressing newsmen after the Senate meeting, former Dean, Faculty of Law, Prof Chioma Agomo, said being briefed about what happened at the council meeting in Abuja by Senate members in council, the Senate said the purported removal of Prof Ogundipe has no legal effect as the process was illegal.

“We called on President Muhammadu Buhari to dissolve the Babalakin-led governing council. The Senate will not accept any surrogate acting VC. The governing council sidelined the Senate. Their ought to be a joint Council and Senate committee on the allegations against the VC.

“Yesterday (Wednesday, August 12) is sad day for us and for me especially, after working here (UNILAG) for 30 years and council will take a decision without Senate inputs.The process of his removal did not follow due process. The Senate, an important arm of the university was ignored in the exercise. The Senate said no to the sack. Prof Ogundipe remains our VC.”

Addressing the congress, Prof Ogundipe, who arrived from Abuja appreciated the four staff unions for their support and asked the wrkers to be hopeful of victory at the end of the crisis.

Prof Ogundipe, who began his speech by thanking God, said peace will continue to reign in UNILAG, adding “I wil forever remain a loyal union member. I am Ok and sound. We should be joyful no matter what has happened.”

He described UNILAG workers as investors in the progress and development of the university and urged them to remain steadfast to continue to promote and protect their investment.

Addressing newsmen after the protest, chairmen of the staff unions unanimously condemned the illegal removal of Prof Ogundipe as UNILAG VC.

The unions observed that a council set up by law and chaired by a Senior Advocate of Nigeria (SAN) can violate the law of the University of Lagos by removing the VC without following due process.

“According to UNILAG Act, laws and practise of other universities not only in Nigeria but in other civilized climes, a principal officer cannot just be removed on flimsy excuses without regard to laws.”

The staff unions declared the sack of Ogundipe illegal based on no notification to the VC on the allegations against him, no investigation panel was set up to look into the allegations in line the university act.

Other reasons include no formal report from any investigative committee and no consideration of report of an investigative committee since none was not set up as provided for in UNILAG law.
They affirmed absolute confidence in the leadership of Prof Ogundipe as the vice chancellor of UNILAG and vowed not recognize anybody appointed as acting VC.

The workers called on the Minister of Education and the Executive Secretary of National Universities Commission (NUC) to stop the charade and lawlessness carried out by Dr. Wale Babalakin-led governing council given its potentials for causing disharmony and industrial instability in UNILAG.